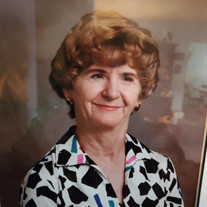 A devoted Mother, Grandmother, Sister and Aunt, Daughter of the late Emile Prosper Mathieu and Marie Louise Juliette Luxeuil, Andrée Jeanne McHugh (Mathieu), 89, passed away peacefully, on Sunday, November 7th, 2021, in her home in Maple Shade, NJ, surrounded by family. Andrée is survived by 4 sons and 1 daughter, 12 grandchildren, 13 great-grandchildren, 2 sisters and many nieces and nephews. Born the year 1932 in Nancy, France, Andrée helped raise her 9 siblings through 5 years of German occupation during WWII. After the war Andrée worked in a crystal factory until she married and emigrated to the US in 1957. With no knowledge of the english language or what to expect she still lived by these lyrics "Que Sera Sera". In the late 70s Andrée became a single mother of 5 and started working in the hospitality industry until she retired in the 90s. Her strong will and perseverance guided her through the exceptional role of mother and father in an era when that wasn't common. Despite her struggles with language barriers, not having her own extended family and little money, she always provided a loving and warm home for her children and grandchildren. Andrée had a passion for everything sports, from spectating at her children's and grandchildrens activities, to catching every game on TV. She enjoyed gardening, cooking and doing puzzles. She never missed sending a card for a birthday, holiday or event to anyone. When you saw her or even spoke to her on the phone she always made you feel like she had been waiting for just you all day and that now her day was complete. Andrée lived a full life and devoted everything she had to her family. She was the strongest, most determined and fiercely independent woman we all know. Andrée inspired everyone to fight to the end, no matter the circumstances. She instilled strength, faith, pride and great values into her children and grandchildren, that serve them all well today. Andrée will be greatly missed but never forgotten. Private mass will be held for the family later this month. In lieu of flowers, cards etc a donation can be made for our veterans to https://operationsecondchance.org/ Or https://www.purpleheartpickup.org/.

The family of Andree Jeanne McHugh created this Life Tributes page to make it easy to share your memories.

A devoted Mother, Grandmother, Sister and Aunt, Daughter of the...

Send flowers to the McHugh family.