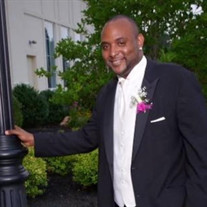 “To everything there is a season and a time to every purpose under Heaven” In the year 1975, on April 28, Albert Williams and Claudette Aris-Williams shared the joy of the birth of their son Ayan Jason Aris-Williams. He was the first born of their two children. Jason had a special place in his heart for his mom and dad but more so for his beloved sister Shante. He also had a special bond with Craig, who he grew up with like a brother. They were inseparable, a support for each other, and Jason’s passing has left a void in Craig’s heart. Jason loved sports and was fun to be around. When watching sports, mainly football, Jason showed such exuberance when his favorite team, “The Philadelphia Eagles” won. The excitement was felt from a distance. Jason grew up in the church and continued to attend Sunday services through adulthood. In his teenage years he accepted the Lord as his personal Savior under the guidance and leadership of Pastor Ed Harris. Jason attended Lenape High school and pursued his educational quest to Rutgers University where he received his Bachelors degree. After college, he was employed as a Sales Consultant at Verizon. His dedication, hard work, excellent work ethics led to his consistently being recognized as a top sales consultant in the state, and a motivator. His commitment did not go unrecognized, during his tenure he won several awards and incentives. Upon leaving Verizon, Jason went on to build his own business, Capital Infosystems, LLC. While working at Verizon, Jason met and fell in love with Maggie, the love of his life, his soulmate, partner and best friend. They were later married on July 3, 2011. The union produced their son Mason, who he loved and adored, two stepchildren Riana and Robert whom he cherished. Prior to Jason’s marriage to Maggie he fathered his first son Jayden whom he also loved and adored. Jayden remained a part of his Dad’s life and would frequently visit to spend time with his father and siblings. Unfortunately, on Wednesday March 17th Jason was admitted to Cooper University Hospital where he departed this life peacefully on March 20, 2021. Jason leaves behind to cherish beautiful memories of his love, kindness and adoration for his wife Maggie, sons Jayden and Mason; stepchildren Robert and Riana and an EMPTYNESS that will never be filled. He is also survived by his mother Claudette, Father Albert, sister Shante, “brother” Craig, nieces, aunts, uncles, cousins, in-laws and a host of relatives and friends who loved him dearly to mourn his passing. Today, we can say, “A special life has passed from our sight but never from our hearts.” Jason will always be remembered for his love of family. May his soul rest in peace and light shine perpetually on him. Relatives and friends are invited to gather on Tuesday evening, March 30th, from 6 pm to 9 pm at Givnish of Cinnaminson, 1200 Route 130 N., and on Wednesday morning, March 31st, at Willingboro Christian Assembly, 175 Somerset Drive, Willingboro, NJ, from 10 am to 11 am. His funeral service will begin at 11 am followed by interment in Lakeview Memorial Park, Cinnaminson, NJ. Jason's funeral service will be live-streamed and can be viewed using this link: https://my.gather.app/remember/ayan-jason-aris-williams To share your fondest memories and condolences, please visit www.Givnish.com.

&#8220;To everything there is a season and a time to every purpose under Heaven&#8221; In the year 1975, on April 28, Albert Williams and Claudette Aris-Williams shared the joy of the birth of their son Ayan Jason Aris-Williams. He was the... View Obituary & Service Information

The family of Ayan Jason Aris-Williams created this Life Tributes page to make it easy to share your memories.

“To everything there is a season and a time to every purpose...

Send flowers to the Aris-Williams family.