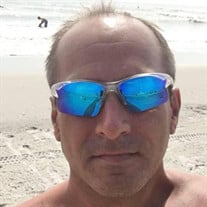 Relatives and friends are invited to gather Friday 7pm-9pm and Saturday 12:30pm-2:00pm at Givnish’s of Cinnaminson, His funeral service will follow at 2:00pm on Saturday May 27, 1964— February 20, 2022 Merriam-Webster defines meteor as an atmospheric phenomenon, a streak of light in the sky. NASA says meteoroids enter Earth’s atmosphere at high speed and those fireballs or “shooting stars” are called meteors. Dan Garthe was a meteor. He was also a devoted son, a loving father, brother and cousin, and a treasured friend who left us too soon on February 20, 2022. He leaves a legacy of love and will be remembered for his untethered imagination, his keen intellect, his grandly irreverent sensibilities, his unlimited talent for whatever he decided to turn his hand to, his exquisite quick-wittedness, his highly inappropriate sense of humor, his renowned culinary concoctions, coveted foot rubs, and other assorted unspeakables. Andrew describes our lifelong friend this way: gastronome, audiophile, beachcomber, calceophile (lover of shoes), aspiring rock star, altruistic friend, and spontaneous being. He had a true photographic memory and the ability to laugh no matter what the circumstances. He didn’t take himself too seriously. He liked bathroom humor, playing music very loud, and pyromania. It’s not lost on those who loved him that he played with fire throughout his journey here on Earth. An accomplished architect, Dan was a fun-loving colleague to many over the years. He was artistic, a jack-of-all-trades, and an avid storyteller. He was an Eagle Scout. The boy had skills. He was creative. He was generous. Food was a passion, and if you hung out with Dan, he fed you with lots of love and garlic. He was equally adept at making elegant Linzer tortes, a mean late-night fried spaghetti, or anything he “had a hankering for,” which usually involved bacon. Dan’s shenanigans remain legendary and too many to recount. Suffice to say he once imperiled numerous children by causing a bouncy house to collapse (he rallied, all good) and to this day, Woo cousins still remember “the wagon incident.” Enough said. If you were lucky enough to know Dan, you know he often had his head in the stars, but he always had his heart firmly with his people. He loved his children very much and nurtured lifelong friendships from childhood through adulthood. He leaves a loyal, saddened tribe of people from all walks who will remember him fiercely and forever. Daniel Garthe was the son of the late Nancy and David Garthe and was raised in the Portland area of Maine. He attended Syracuse University and Drexel University and enjoyed a long and successful career as an architect. He is survived by his children, Nathaniel, Gabriel, and Ana, his brother Douglas, and his former wife, Stacy.

The family of Daniel R. Garthe created this Life Tributes page to make it easy to share your memories.

Relatives and friends are invited to gather Friday 7pm-9pm and...

Send flowers to the Garthe family.