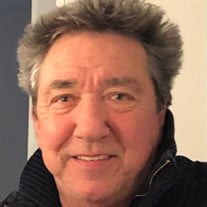 David Beringer, 67, passed away on January 23th, 2022. Beloved son of the late Albert and Loretta Beringer. Loving brother to Albert (Phyllis), the late Gregory (Maureen), and the late Andrew. Beloved uncle to Amy Delgado (Manny), Susan Roy (Josh), Albert (Makenna), and Lauryn Wisniewski (Steve). Special great uncle to Jacob, Isabella, Eliana, Caleb, Jackson, Josie, Sam, Shea, and Brooks. David was Another Friend of Bill W., Member in good standing since September 19, 1997. One day at a time. David was born in Philadelphia on Tuesday April 20th, 1954. He grew up the third of four brothers in Maple Shade, participating in local sports and scouting. He attended OLPH grammar school and graduated from Merchantville High School in 1972. After graduation Dave traveled to Florida working first as a waiter and then finding jobs in the burgeoning Florida housing market. In addition to work, he spent time fishing and partying. He eventually moved back to South Jersey and worked in carpet installation and sales. A major event occurred in Dave's life when he became involved with Alcoholics Anonymous, and has been a member in good standing since September 19th, 1997. He made many cherished friends there and helped others as they have helped and supported him. In May of 2001 he suffered a very serious heart attack, requiring several surgeries to his heart and lungs. His friends and involvement in AA played a part helping him get through that and to live more than another 20 productive years. Dave loved his family. Horse racing and annual trips to Saratoga Springs with his brothers and nephew were events approaching the magic of Christmas with family. Summer cookouts, birthdays, and holidays, all usually celebrated at one of his nieces homes were loving and joyous. A special thing to him was spending time with and doting on his great nieces and nephews. It could be watching them play sports, going fishing, sharing his love of horses, or just watching them grow and learn. They were all loved and golden. Dave has left us and is reunited with his parents, two deceased brothers, grandparents and other friends and relatives. We miss him dearly, but his memories will certainly make our hearts smile. Viewing will be held on Saturday January 29th from 9 a.m. to 11:00 a.m. at Givnish funeral home located at 600 East Main Street, Maple Shade, followed by a service beginning at 11 a.m. Interment private. David was a kind and caring person. In lieu of flowers the family requests that you do something kind for someone every day.

The family of David Beringer created this Life Tributes page to make it easy to share your memories.