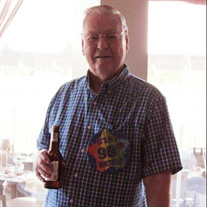 Donald Brewer Shaffer, aged 95, passed away on June 24, 2021, of COVID19 complications at Jefferson Medical/Cherry Hill Hospital. Donald was born in Riverside on September 19, 1925, to the late Edna Brewer Shaffer and George Harrison Shaffer, Jr. He was one of nine children and was predeceased by six of his siblings: Edna, Kathryn, Ruth, George, Robert and Doris. In 1945, he joined the US Navy as a 1st Class Seaman on the USS Yosemite, a supply ship to the Pacific fleet. After the war, he returned to Riverside High School where he met his future wife, Bernyce Slawinski. They were married in 1949 and lived in Delran until Bernyce passed away in 2009. He worked for many years as a hard-working, trustworthy foreman for Whitesell Construction Co. Donald was a thoughtful, kind and generous man to family, friends and neighbors. He leaves to mourn his daughter Cynthia Lamon, granddaughters Jennifer Lamon and Lauren Retzco (Michael), both of Cinnaminson, sisters Joan Delancey of Moorestown and Carole Shaffer-Koros (Robert) of Westfield, five great grandchildren as well as many nieces and nephews. In Donald’s memory, donations may be made to the Popcorn Zoo, www.ahscares.org/. Arrangements are private and at the convenience of his immediate family.

The family of Donald Brewer Shaffer created this Life Tributes page to make it easy to share your memories.

Send flowers to the Shaffer family.