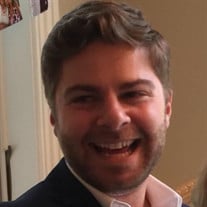 Eric Woloshin of Philadelphia passed away suddenly on April 11th, 2021 at the age of 32. Beloved son of Michael and Donna (nee Steelman) Woloshin; dear brother of Katie Woloshin Corsetto and her husband Brent. Eric is also survived by his maternal grandmother Nancy Steelman, and his favorite Aunt Lele, along with many other family members and friends. Eric was born at Pennsylvania Hospital and moved with his family to Medford at 1 year old. He had a wonderful childhood with all of his friends on Mill Run Court. He had many passions. First and foremost was his passion for family. He would literally give the shirt off of his back for a person he loved. He could hold a conversation with the very young (cousins Gracie and Lucas) to the not so young. He was always interested; his spirit and smile were captivating. At large family gatherings he would have all the cousins falling off their chairs with his sense of humor and infectious laughter. His love for his sister was shown through their laughter and antics. He could not praise her enough on her cooking and her beautiful new home – and a food compliment from Eric really meant something! He also adored and had a deep respect for his “new brother” Brent. His father was his hero. They enjoyed so many great times together, too many to count. Skiing, boating, dining, and drinking fine wine were just a few. He regularly told him how much he loved him, and Michael cherished him from the bottom of his heart. They did at times disagree on a wine selection, but always tried each other’s choices. They so enjoyed each other’s company; they would sit for hours at a table commenting on the food they were relishing and contemplating the pairings of each course. Eric’s relationship with his mom was beyond special. They adored each other. He always complemented her on everything from her style to how she prepared a meal. They were cut from the same cloth, from their smile to the shape of their noses. Their hugs truly embodied the bond between mother and son. As mentioned, food and wine were high on his list of priorities. To dine with Eric was an experience unto itself. He could always point out the subtleties in the food and preferred very gourmet choices. This, from someone who ate about seven items as a kid. He went from Mac’n’cheese and fruit cocktail to foie gras and anything with foam. And, of course, the wine selection had to match. Additionally, Eric had a deep love for the family traditions that were passed down to him by his mother. It would be impossible to deviate from the Christmas menu because that’s what he looked forward to the most. With his love of food, it should be evident that he was also an accomplished cook. He enjoyed farm grown produce, even while living in Brooklyn, and could make a carrot taste like something else entirely. His patience with chopping and food prep were nothing short of admirable. This skill, joined with his personality, contributed to a career in fine dining at some of the best establishments in Philadelphia and New York City. Another passion for Eric was skateboarding. There was a park near his childhood home, and it became his favorite place to be. He had a lot of energy and skateboarding was the perfect outlet. He met some of his closest friends from his skateboarding adventures around the world. His memory will live in our hearts forever. Family and close friends are invited to a private celebration of Eric’s life, starting at 10:30am on Friday, April 16th, 2021, followed by services at 12pm. A private interment will be at Laurel Memorial Park & Cemetery at 1:30pm. There will also be a livestream of the ceremony at https://my.gather.app/remember/eric-woloshin In lieu of flowers, please send donations to Tony Hawk’s Skate Park Project at: www.skatepark.org

Eric Woloshin of Philadelphia passed away suddenly on April 11th, 2021 at the age of 32. Beloved son of Michael and Donna (nee Steelman) Woloshin; dear brother of Katie Woloshin Corsetto and her husband Brent. Eric is also survived by his maternal... View Obituary & Service Information

The family of Eric T. Woloshin created this Life Tributes page to make it easy to share your memories.

Eric Woloshin of Philadelphia passed away suddenly on April 11th,...

Send flowers to the Woloshin family.