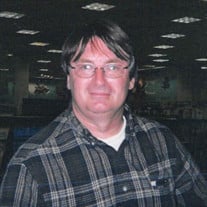 George Sharpe left this world for the next on December 12, 2021. He was 67 years old. He is survived by his father, George E. Sharpe (Elizabeth Philips), his brother Robert Sharpe (Diane), his sister Theresa Lovett (Dave), his brother Dennis (Cindy) and his sister Kathleen Shuler (Matt). In addition he will be missed by his many nieces and nephews: Caitlin Murray, Christopher Lovett, Hilary Dilla, Brian Sharpe, Stephanie McCormick, Lane Shuler, and Kendall Oswald. In addition he leaves behind grand nieces and grand nephews Lillian Murray, Abigail Murray, Brian Sharpe II, Emma McCormick, Mackenzie McCormick, Daniel McCormick, Jerome Lovett and Sally Dilla. George also leaves many lifelong friends. He was predeceased by his mother Catherine Sharpe. George always marched to the beat of his own drummer. His greatest ambition was to become a stand up comic. Even after suffering a traumatic brain injury which deprived him of the ability to communicate fully, he was still able to tell everyone that he was a comedian. Though George never made it onto the Tonight Show, he was not bitter about it. In addition to comedy, George was an avid rock and roller. He was especially devoted to the Beatles. His collection of CD’s contains more versions of “Rocky Raccoon” than anyone could ever imagine. In his pursuit of comedic stardom and happiness, George traveled many roads, living in Los Angeles, Philadelphia, Maple Shade and parts unknown. His travels led to his unfortunate accident in 1997. As George recovered, he spent many hours learning to deal with the limitations of his injuries. He walked with a cane and a limp for many years. The staff at many restaurants and book stores knew him well. Though George’s communication limitations were significant, he was able to let people around him know how he felt. As we remember him, it seems appropriate to echo one of his favorite sentiments: “Cool cool cool” Relatives and friends are invited to gather at Givnish Funeral Home of Maple Shade, 600 East Main Street on Saturday December 18th from 12 till 2:00 PM. To share your fondest memories and condolences, visit www.Givnish.com

George Sharpe left this world for the next on December 12, 2021. He was 67 years old. He is survived by his father, George E. Sharpe (Elizabeth Philips), his brother Robert Sharpe (Diane), his sister Theresa Lovett (Dave), his brother Dennis... View Obituary & Service Information

The family of George Sharpe created this Life Tributes page to make it easy to share your memories.

Send flowers to the Sharpe family.