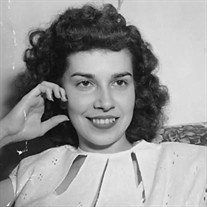 Helen Patricia Staskevich passed away at age 97 on December 3, 2020 at her Delran, New Jersey home. Helen P. (nee Stasko) Staskevich was born on June 30, 1923 in Coal Center, PA. Her father was Nicholas Stasko, who died in 1933 and her mother was Hadwigo Stasko, who died in 1958. Helen was an Administrative Secretary at California State Teachers College in California, PA for 15 years. She met Benedict W. Staskevich while in high school, who served as a Navy Chief Petty Officer in WW2 and they married in 1948. Helen was a good Navy wife following Ben where ever he was stationed. Her favorite Navy bases were Port of Spain, Trinidad, and especially Naples, Italy, from where she traveled extensively throughout Europe. While stationed in Naples, Helen and Ben adopted their son Michael A. Staskevich in Landshut, Germany. Helen followed Ben to bases in Erie, Pennsylvania; Charleston, South Carolina; Key West, Florida; Virginia Beach, VA; Philadelphia, Pennsylvania and Woodbury, New Jersey finally making their home in Delran, New Jersey in 1963. In addition to be a loving wife and devoted mother, Helen was fluent in Polish which was spoken at home and became fluent in Italian while in Italy. She loved to read and cook, was a member of the Delran Seniors Club and was a faithful member of St Casmir’s Catholic Church/Resurrection Parish. Helen’s mother and father along with sisters- Alexanderia “Alice” and Josephine, brothers –John, Alexander and Frank Stasko all predeceased her. Her husband, Ben Staskevich predeceased her in December 1995 and her son, Michael predeceased her recently in July 2016. She is survived by nephew, Nick Lutes of Elmira, NY; nephew, Andrew “Buzzy” Garnic of Coal City, PA; niece, Bonnie Stasko Williams of Port Charlotte, FL; grand- nephew, Raymond Martin and grand-niece, Cathie Martin both of Dumont, New Jersey; long-time friend, Philip Snow of East Windsor, New Jersey and many other loved family and friends. Visitation for Helen will be held on Friday, December 11th, at Givnish Funeral Home, 1200 Route 130 North, Cinnaminson, NJ, from 9:30 am to 10:30 am, followed by her Funeral Mass at 11:00 am at Resurrection Parish, Church of the Holy Name site, 260 Conrow Road, Delran, NJ. Interment will be private. To share your condolences and fondest memories, please visit www.Givnish.com.

Helen Patricia Staskevich passed away at age 97 on December 3, 2020 at her Delran, New Jersey home. Helen P. (nee Stasko) Staskevich was born on June 30, 1923 in Coal Center, PA. Her father was Nicholas Stasko, who died in 1933 and her mother... View Obituary & Service Information

The family of Helen P Staskevich created this Life Tributes page to make it easy to share your memories.

Helen Patricia Staskevich passed away at age 97 on December 3,...

Send flowers to the Staskevich family.