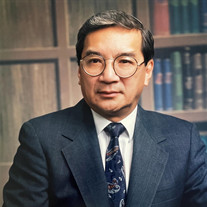 Herbert M. Jung, 89, a resident of Mt. Laurel, NJ unexpectedly passed away on Friday, October 23, 2020. A native of Philadelphia, Herb was the youngest of 10 children born to Henry Kay and Helen Jung on September 11, 1931. His family home was located above his father’s place of business, Hong Fook & Co, a Chinese goods import store in the Chinatown section of Philadelphia. As a boy, Herb attended public school before transferring to Holy Redeemer Chinese Catholic school and church after it was built in 1941. He graduated from Roman Catholic High School in 1948. Following high school, he worked at the Stetson Hat Company before enrolling into LaSalle University in Philadelphia where he graduated with a Bachelor’s Degree in Education in 1955. After graduation, he fulfilled his military obligation by honorably serving in the United States Army in Germany until 1957. He later furthered his education earning a Master’s degree in Education from Temple University in 1965. Herb had a long and distinguished career as an educator in the Philadelphia Public School system. He got his first teaching job as an English teacher at Stetson Junior High School in 1958. In 1961, he was named chairman of the school’s English department. He was appointed vice principal of Stetson Junior High School in 1967 and moved to the Conwell Middle Magnet School, a school nationally known for its innovative approaches to education in 1968. In 1972, the Philadelphia School Board appointed Herb to be the principal at Stetson Junior High, making him the first Chinese-American ever to hold such a position in the Philadelphia School District. In 1988, he was appointed principal of South Philadelphia High School and finished his career in 1993 after 35 years of outstanding service. Herb was a leader and advocate for the Philadelphia Asian community. He served on the executive board of the Philadelphia Chinese Lions Club, which provides services to the Chinese Community and works with Chinese youth in seeking to preserve Chinese heritage. He also served as president of the Holy Redeemer Catholic Club. This club helps organize, coordinate and implement various social and community service activities. In 1988, he founded the Asian American Educators organization to support teaching and education in the Asian communities. He served as president from 1988 to 1995. Herb was a talented athlete who excelled in any sport he played. During his childhood, he played competitive baseball, basketball and football. In 1945, he quarterbacked an all Chinese football team to the championship title of the Philadelphia Pop Warner Football League. He also played point guard for the Chinatown Philadelphia Suns basketball team. As an adult, he continued to be active in sports and played in a men’s softball league in Cinnaminson, NJ. Herb also loved to coach. He coached the Sun’s Basketball team which some of his nephews played on and he coached baseball, basketball, softball and soccer for his children’s teams. Later in life, he was an avid golfer, bowler and billiards player. Herb married the love of his life, Pauline in 1958. They settled in Cinnaminson, NJ where they raised their five children. Herb is survived by his loving wife of 61 years, Pauline Jung (nee Young), his children Michael Jung (Suzanne), Lisa Jung (Stephen Moss), Lori Hussong (Dan), Kurt Jung (Onlei) and Chris Jung (Bethany). He was a proud grandfather to Tyler (Yunzhe), Madison, Zachary and Kendall Jung; Alexandra Lintao (Devin), Olivia Jung-Moss; Michael, Colby and Thomas Hussong; Eric and Nicole Jung; Tristan, Charlotte and Magnolia Jung. Herb is also survived by his sister Ruth Louie, his in-laws Betty Jung and Shiu Jung and many nieces and nephews who were all dear to his heart. A viewing will be held on Thursday, October 29, 2020, at Holy Redeemer Chinese Catholic Church, 915 Vine St, Philadelphia, PA from 9:30-11:30 am. A private mass will begin at 11:30 am and the interment will take place at Lakeview Memorial Park in Cinnaminson, NJ. All who wish to share your fondest memories may visit Givnish.com. Donations may be made in Herbert’s name to Holy Redeemer Chinese Catholic Church at the above address.

Herbert M. Jung, 89, a resident of Mt. Laurel, NJ unexpectedly passed away on Friday, October 23, 2020. A native of Philadelphia, Herb was the youngest of 10 children born to Henry Kay and Helen Jung on September 11, 1931. His family home was... View Obituary & Service Information

The family of Herbert M. Jung created this Life Tributes page to make it easy to share your memories.

Send flowers to the Jung family.