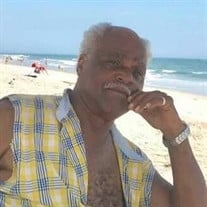 Celebration of Life Herbert Lee Wilson also known to many as “Herbie” departed this earth on Tuesday August 25,2020. He was born in Thorofare, New Jersey to the late Noah Wilson and Ethel L. Pierce-Wilson. Herbert spent his early childhood in West Deptford New Jersey and attended Public School System. His parents moved to Camden, New Jersey at the age of 19. He also enjoyed music, playing the guitar, dancing, singing, fishing, crabbing, skating, family gatherings, but he what he loved the most was the beach and the water. Cooking was a passion that Herbie turned into a career by becoming a Chef. He also loved the lord and was a faithful member at First Baptist Church in Jericho. He served on the men’s class, bible study and volunteered his time as a gate keeper. Herbie’s cooking career started and Calico Kitchen and moved on to the Grand Coach Grill until his retirement. During his retirement he did the most to enjoy life to the fullest by traveling and participating in his favorite pastimes. In his early adult years, he met and married Felice Taylor, and from that union came five children his daughter the late Jacqueline D. Wilson and his son the late Anthony L. Wilson. Herbert is survived by his three children sons James L Wilson (Marissa), Noah L. Wilson and Charlisa A. Wilson his beloved daughter. Herbert siblings are his late sisters Lois Bundy and Anna L Johnson; he is survived by one living sister Margaret A. Wilson. Later on in his life he met his fiancé Shirley Embenecker the love of his life, they were inseparable from the time they met up until his un-timely death his love for her will live on and the life they shared. Herbert is survived by 16 grandchildren and 18 great-grandchildren two step children and two step grandchildren. He leaves to mourn and cherish his memory a host of nieces, nephews, relatives, and friends. All his nieces were special to him, but he had a special relationship with Shawnelle Washington and Karen Pierce. Herbert also had one special grand-daughter Nataly A. Williams –Wilson who he loved dearly. He will be greatly missed. A viewing will be held for Herbert L. Wilson at Givnish of Cinnaminson 1200 Rt. 130 N. Cinnaminson, NJ, 08077 on Saturday September 5, 2020 from 9am-11am. Following the viewing, a service will begin at the funeral home starting at 11am. Burial will be held privately by the family at a later date.

Celebration of Life Herbert Lee Wilson also known to many as &#8220;Herbie&#8221; departed this earth on Tuesday August 25,2020. He was born in Thorofare, New Jersey to the late Noah Wilson and Ethel L. Pierce-Wilson. Herbert spent his early... View Obituary & Service Information

The family of Herbert Lee Wilson created this Life Tributes page to make it easy to share your memories.

Herbert Lee Wilson also known to many as...

Send flowers to the Wilson family.