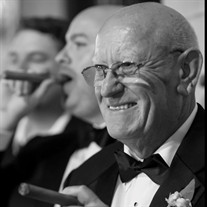 Jim Juliano Sr. passed away peacefully at home on Thursday, March 17 2022 in the loving embrace of his wife Jackie, his son Jim Jr. and his daughter in law Deanna. As a young man Jim excelled in school and loved sports.  From humble beginnings growing up in North Bergen NJ, Jim graduated from St Michael’s High School as class President, then went on to graduate from Newark College of Engineering, the first in his family to attend college.  In college Jim became a proud fraternity brother of Pi Kappa Phi, where he made lifelong friendships.  Jim graduated as a chemical engineer and worked his way up at multiple global chemical firms like Monsanto and Atofina.  While working, Jim attended Drexel School of Business at night to earn his MBA and ultimately retired as head of North American sales for Atofina.  His career allowed him to travel the world, seeing almost all of Asia and Europe, even living in Brazil for several years with his wife Jackie.  His favorite trip, however, was a family vacation with his wife and son to Italy tracing his roots back to a small village outside of Naples.   He loved cigars, wine, books, a cold beer, history, politics, and NY sports, especially the Yankees and Giants.  He was an avid golfer, amassing a collection of score cards from rounds played all over the world.  He loved the beach and was known by his family as a professional boardwalk quarter pitch player. His favorite place was home, first in Randolph, NJ and then Medford, NJ.  He also loved Naples, FL where he lived with Jackie for twelve years after his retirement.  He made many friends in that community and was proud to organize the annual wine walk festival and serve as president of the rotary club. He loved great food, the highlight being the Feast of the Seven Fishes every Christmas Eve.  He was a grill master, especially cedar planked salmon, and was a connoisseur of Patsy’s fra diavolo sauce.  Many meals ended with a gelato, a glass of Port or a Sambuca. He was an outspoken and independent thinker.  He could converse about anything with anyone…and he sure did.  He truly was the “mayor” wherever he was.  Everyone who knew him, loved him.  He made people feel safe and interesting and loved. He was a collector…coins, stamps, books, art, Dickens’ Village, baseball cards, golf scorecards, Richmond Spiders apparel…He collected it all.   Those fortunate enough to know Jim got to collect as well.  We collected memories of a truly selfless husband, father, grandfather, colleague and friend.   Jim was a devoted husband to his wife Jackie.  They were married for 43 years. Jim was a loving father to his son, Jim Jr., and his daughter, Dawn.  He was so very proud of the people they have become and the lives they have built for themselves. But nothing came close to his last and most treasured role as “Pa.”  Jim’s three grandchildren Ashlyn (20), James (8) and Joey (5) brought him the most joy in life.   Jim was enormously proud of his granddaughter Ashlyn and her incredible scholastic and swimming achievements.  He often bragged about her collegiate and Olympic trial successes.   For his youngest grandchildren, nothing made Jim happier than spending time with James and Joey.  His love for collecting became their love for collecting.  Pokémon cards, baseball cards, gems, legos…if they were interested in it then “Pa” made it his priority.  He never said “No” to them.  He loved watching them play, especially sports.  He never missed a game.  Actually, there weren’t many practices he missed either.  It was a true joy of his life watching his young grandsons have fun.   Over the last several months Jim was determined to make it out of the hospital to see his young grandsons one more time, a promise he kept.  He made it home to spend one full day with them, host one final sleepover and see them off to school the next morning before passing. In his final days, Jim told his son Jim Jr. that he had so much more left to do…For his wife, for his children and for his grandchildren.  Ultimately, Jim would want all of us to take that advice and spend our precious time doing what we love with the people we love. His warm smile, kind words and treasured advice will be deeply missed. Jim is survived by his wife Jackie, his son Jim Jr. (Deanna), his daughter Dawn (Frank), his grandchildren Ashlyn, James and Joey, his sister Rita and nieces, nephews and cousins. A gathering of family and friends will be held this Saturday, March 26th from 12 p.m.to 1:30 p.m. at Givnish of Marlton, 398 East Main Street. Jim’s Memorial Service will follow at 1:30 p.m. To share your fondest memories of Jim, please visit www.givnish.com

Jim Juliano Sr. passed away peacefully at home on Thursday, March 17 2022 in the loving embrace of his wife Jackie, his son Jim Jr. and his daughter in law Deanna. As a young man Jim excelled in school and loved sports.  From humble beginnings... View Obituary & Service Information

The family of James J. Juliano created this Life Tributes page to make it easy to share your memories.

Send flowers to the Juliano family.