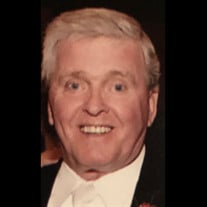 James P. O’Callaghan, 87, of Voorhees, N.J. passed away Oct. 27. He was born July 12, 1933, to Patrick and Mae O’Callaghan in Philadelphia. He was raised and educated in the Germantown section. In 1955, he was married to Carolyn E. Happ and a few years later moved to Willingboro N.J. where they raised their two children. He later moved to Cinnaminson where he resided for 30 years and then to Egg Harbor Twp. He spent his last year in Voorhees, N.J. Jim was predeceased by his wife Carolyn in April of this year. He is survived by his daughter, Karen Vidovich (Rob) of Shamong, N.J.; son James P. O’Callaghan Jr. (Terry) of Pennsauken, N.J.; granddaughters Michelle Vidovich of Haddon Township, N.J.; Rachel Vidovich of Williamstown, N.J.; and Megan O’Callaghan of Baltimore, Md.; great grandson R.J. Pelton of Haddon Twp; brothers John Joseph (Marion) of Hatboro, Pa.; Daniel F. “Reds,” of Lansdale, Pa.; and William Patrick (Lois) of Mt. Joy, Pa. as well as many nieces and nephews. Jim worked as a teenager and young adult for Acme Markets. He then worked for The Philadelphia Electric Company for 36 years as a substation operator and later as an employee safety trainer. He loved sports and played organized football for the East Germantown Ramblers. He excelled at baseball and was scouted by a professional team, but he could not be signed because of a previous injury. He loved playing with his son and the neighborhood boys. He supported both his children in their sporting activities and was an avid Eagles and Phillies fan. His granddaughter, Megan, remembers him calling her the night the Eagles won the divisional round in the 2018 NFL playoffs, after which they went on to win the Super Bowl. “His laugh and the joy in his voice are sounds I’ll never forget,” she recalled. He enjoyed talking about the weather and had an obsession with maps. When he was travelling, he always stopped at state tourist information centers to get the most current maps. And, if you were travelling, he always made sure you knew how to get where you were going. Jim could engage almost anyone in conversation. He seemed to know everyone wherever he went. His granddaughter, Rachel, at the age of 8, once asked if was the mayor. He always made sure the grandkids had what they needed, especially sneakers for the new sports season. He adored his girls. When it was time for Michelle, his first born granddaughter, to leave for college in Illinois he cried and he was the first to schedule his flight for her graduation. Jim had a special relationship with his brothers, talking with one of them by phone almost every day. He was a great role model for maintaining family relationships. He will be missed by all who loved him. Interment was private. A Mass and celebration of life will be held at a later date. To share your fondest memories and condolences, please visit www.Givnish.com.

The family of James P. O'Callaghan created this Life Tributes page to make it easy to share your memories.

Send flowers to the O'Callaghan family.