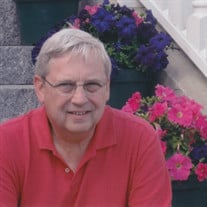 On September 11th, 2021, James Edward Strangfeld finished his last day with us and is now on to do other things. Jim, according to those who knew him, was one of the warmest, kindest people you would ever meet. Son of Richard and Ann, his journey began on June 5, 1946, in Suffern, NY, much to the dismay of his older brother Richard who shared the same birthday. Jim grew up in Ramsey, NJ, where, not surprisingly, he was voted “friendliest” in high school. In 1968, he graduated from Muhlenberg College with a B.A. in psychology and immediately took a job at Central Penn National Bank. That same month, he and his seventh-grade sweetheart Diane Carlock were married. For 53 years they loved each other “more today than yesterday.” The years between 1970 and 1976 were busy for them with job changes and the arrival of their two children Stacy and Jason. Later, sons-in-law Peter (Stacy) and Jon (Jason) were welcomed into the family. When he decided that big banking was no longer for him, Jim co-founded 1st Colonial National Bank in 2001 where he remained until his retirement in 2013. As a community banker, Jim most enjoyed developing relationships with his customers. With his big smile and kind words, Jim had a special gift for making others feel comfortable. He would give a good-natured ribbing on the golf course, say a kind word at the car wash, or offer to take a photo of someone else while he and Diane were traveling the US and Europe. He served his Prince of Peace church family by heading the Finance Committee and serving as Council president. Recently, he volunteered at the church’s food pantry. Jim loved to be social, whether it was on his porch in Cape May with friends, on the front dock at Rabbit Island with extended family, or fishing with his buddies PJ and Duncan. Whenever Diane heard him singing along to Johnny Cash or The Statler Brothers while working on his model trains, she knew he was happy. However, his greatest joy was his family. In 2010, he began a new role as New Jersey Grandpa to Paige and later her brother Rhys. Giving pony rides, making blanket forts, and pulling magic quarters out of ears were a few of Jim’s tools in the grandpa toolbox. Those who were lucky enough to cross paths with Jim have been the beneficiaries of his humor, warmth, and kindness. Family and friends are invited to attend a visitation on Friday, September 17, 2021 at Givnish Funeral Home, 398 East Main Street, Marlton, NJ 08053, from 2 to 4 pm. The family kindly requests those attending wear masks. There will be a brief visitation with the family on Saturday, September 18, 2021 at 10:30am, followed by a celebration of life at 11:00am under the tent at Prince of Peace Lutheran Church, 61 Route 70 East, Marlton, NJ 08053. In lieu of flowers, please consider donating to the Prince of Peace Lutheran Church community outreach program which supports local families in need. Checks can be made payable to Prince of Peace Lutheran Church, 61 Route 70 East, Marlton, NJ 08053, Attention - Jim Strangfeld Memorial Fund. Use your favorite grandpa tool to give comfort, kindness, and a smile.

On September 11th, 2021, James Edward Strangfeld finished his last day with us and is now on to do other things. Jim, according to those who knew him, was one of the warmest, kindest people you would ever meet. Son of Richard and Ann, his... View Obituary & Service Information

The family of James Edward Strangfeld created this Life Tributes page to make it easy to share your memories.

Send flowers to the Strangfeld family.