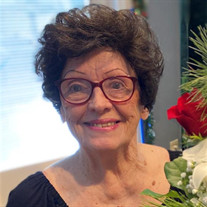 Janet J. Borrelli (née Fiore) of Cherry Hill, NJ, passed away peacefully in her home on July 19, 2021 surrounded by her loving family, ready to join her husband, Dominic, in Heaven. She was 85 years old. She was born and raised in South Philadelphia, PA to the late Alexander and Millie Fiore. For many years, Janet and Dominic ran their own restaurants with their children Steven, Mark, Ken, and Jan. Alongside the restaurant business, she was a wonderful homemaker. One of Janet's favorite pastimes was going out to eat at her favorite restaurants, as well as shopping with her daughter and granddaughter, Kelly. She particularly loved Dunkin Donuts, Cheesecake Factory, Pepsi (not Coke), and chinese food. Janet was a big fan of anything leopard print and all Philadelphia sports teams. Turner Classic Movies, the Golden Girls, and Murder She Wrote were always playing on her TV. No matter the weather, hot or cold, Janet was never without a jacket to keep her warm -- and would always try to pass this wisdom off to others. Janet was the beloved wife of the late Dominic Borrelli; loving mother of Steven Borrelli (Gayle), Mark Borrelli (Carolyn), Ken Borrelli (Kim), and Janet Maloney (Mike); cherished grandmother of Michael Maloney, Dominic Maloney, Kelly Maloney, Nick Borrelli (Britt), Justin Borrelli, Vince Borrelli, Anthony Borrelli, Brandon Borrelli, Kristyn Borrelli, Erica Favocci (Ray), and Brielle Rigilano (Bobby Dooner); Great grandmother of Ethan, Alden, Chase, Darren, and Alana. Janet was predeceased by her sisters, Mildred Ritondo, Tracy Donalds, and Irene Fiore. Janet is also survived by many nieces, nephews, extended family members and friends who will miss her dearly. For the past 25 years she has lived in Cherry Hill with her daughter and her family and helped raise Michael, Dominic, and Kelly. She was an integral part of their lives and they in turn were her caregivers at the end. Relatives and friends are invited to gather at Givnish of Marlton, 398 East Main St, on Friday evening from 6pm – 8pm, and Saturday morning from 8:45am – 10:15am. Her funeral Mass will begin at 11 am at the Catholic Church of St. Mary, 2001 Springdale Road, Cherry Hill, followed by interment in Calvary Cemetery, 2398 Route 70 W., Cherry Hill. In lieu of flowers, donations in memory of Janet may be made to the St. Jude Children’s Research Hospital, www.StJude.org.

Janet J. Borrelli (née Fiore) of Cherry Hill, NJ, passed away peacefully in her home on July 19, 2021 surrounded by her loving family, ready to join her husband, Dominic, in Heaven. She was 85 years old. She was born and raised in South Philadelphia,... View Obituary & Service Information

The family of Janet J. Borrelli created this Life Tributes page to make it easy to share your memories.

Send flowers to the Borrelli family.