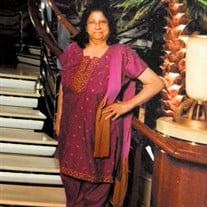 Jayshree C. Shrimankar, age 78, of Wilingboro, NJ, passed away December 8, 2021. Jayshree (Parikh) was born on August 14, 1943 to Shantilal and Pushpavati Parikh, in Ahmedabad, Gujarat, India. Jayshree received her Bachelor’s of Science degree in Chemistry from Gujarat College in 1966 and worked as a teacher in the fields of Home Science and Chemical Science. She married Dr. Yogesh Choksi in 1968 and moved with him to the United States in 1969. They lived in Connecticut until 1976, when they moved to Manahawkin, NJ. There, Jayshree participated extensively in her children’s activities, including serving as a leader to her children’s Girl and Boy Scouts troops. She also became deeply involved in managing the business of her husband’s medical office, including many of its daily activities. After her husband’s death in 1990, she continued to work in the medical field by using her expertise in medical coding for other medical practices. In 1995, she moved to Texas to be closer to her older brother Awanish Parkih. She continued to apply her medical coding expertise at numerous medical practices within Texas. In 2000, she remarried Pravin Shrimanakar and settled in Arlington, Texas. Jayshree became involved in the Lion’s Club and the Hindu temple nearby. She and Pravin continued to travel and enjoyed seeing a variety of locations near and far, including Alaska and Australia. She also enjoyed spending time with her friends at dinners and religious gatherings. After Pravin’s death in 2015, she remained busy within her religious community and traveling. She took a once-in-a-lifetime trip to Africa where she was amazed by the sights. In 2019, she moved to New Jersey to be with her son and daughter-in-law. While she struggled in her final years with the effects of Parkinson’s Disease and dementia, she never forgot her love of the television show “Golden Girls” and game shows like “Family Feud,” or for her family. Jayshree was preceded in death by her brothers Rashmi Parikh and Dilip Parikh, and her sister-in-law Bhakti Parikh. She is survived in death by her son and daughter-in-law Nirav and Alison Choksi, daughter and son-in-law Neepa Choksi and John Gentry, her grandchildren Alex and Asha, her brother and sister-in-law Awanish and Ila Parikh, and many nieces and nephews. Services were postponed due to the surge of the Covid virus cases. Please check back for a new date. In lieu of flowers, the family requests that donations be made to the Parkinson’s Foundation (www.parkinson.org). *Arrangements for services in Texas will be announced in the new year.

The family of Jayshree C. Shrimankar created this Life Tributes page to make it easy to share your memories.

Send flowers to the Shrimankar family.