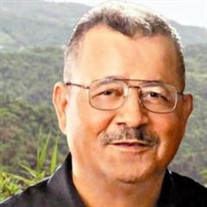 Jesus Roque lovingly known as Cholo of Camden, NJ was born on June 2nd, 1950, in Cidra, Puerto Rico to the late Francisco Roque and Luisa Rodriguez-Roque. Cholo was the beloved husband of Luz Class- Roque for over 40 years; during their marriage he became the devoted father of Mariliz and Jessica; also, father of Claribeth, Maribeth, Zulma, Jesus, Luis, and Enrique; loving grandfather of Pedro, Aniya, Iyahna, Destany, and 13 additional grandchildren; dear brother of Rodrigo, Francisco, Annie, Irma, Raul, and Olga. Cholo joins in Heaven, siblings: Jovita, Isabel, Benjamin, Victor, Antonio, and Angel. Cholo was a dedicated and cherished family man that enjoyed spending time with those most dear to his heart: his children, grandchildren, and great grandchild: Enzo. He especially looked forward to his annual trips to Puerto Rico where he would reunite with his siblings, spend time enjoying nature and indulging in mangos. Cholo was a devout Catholic who made it his mission to attend services at St. Anthony’s Parish, gave back to Saint Jude’s Research Hospital and the Operation Smiles Organization. Not only did he give to his family and friends, but he also felt compelled to help all those who were in need. Cholo had various hobbies that he loved such as spending time in his casita, smoking cigars, and playing dominoes. Cholo would sit and admire the pigeons and fed them rice he had saved from the previous day’s dinner. To relax he enjoyed listening to the sounds of the rain and watching Animal Planet. He loved dancing to merengue, but his all-time favorite was being part of the parrandas during this time of year in which he celebrated his culture and Puerto Rican traditions. However, he was most passionate about gardening and what he did for a living which was being a part of the Camden Diocese for over 10 years. Cholo’s job was to perform maintenance at the Cathedral Hall and office buildings. Prior to that he dedicated most of his younger years being the Foreman at J.D Construction. Cholo had an unforgettable smile and a sense of humor that will be immensely missed. He was a man of great integrity that lived his life through his faith. Cholo welcomed everyone with open arms and instilled morals and values for generations to come. Cholo is survived by many nieces, nephews, family, and friends. He will be profoundly and deeply missed by all that knew and loved him. In lieu of flowers, any memorial contributions can be made directly to the family.

Jesus Roque lovingly known as Cholo of Camden, NJ was born on June 2nd, 1950, in Cidra, Puerto Rico to the late Francisco Roque and Luisa Rodriguez-Roque. Cholo was the beloved husband of Luz Class- Roque for over 40 years; during their marriage... View Obituary & Service Information

The family of Jesus Roque created this Life Tributes page to make it easy to share your memories.

Jesus Roque lovingly known as Cholo of Camden, NJ was born on...

Send flowers to the Roque family.