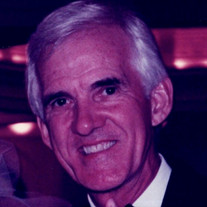 John “Jack” T. Dare passed away peacefully on Thursday, November 4, 2021 with his family by his side. Born in West Pittston, PA to Lawson S. and Esther P. Dare, Jack was 85 years old. Jack grew up in Bellmawr Park, NJ and moved to Delran at the age of 16 where he attended Riverside High School and met the love of his life, Janice. They married in 1960 and moved to Moorestown in 1964 where they raised their family in a home Jack, his father and father-in-law built with their own hands. Beloved husband of 61 years to Janice V. (nee Sarlo). Loving father of Joan (Gene) Litt and John (Marissa) Dare. Cherished grandpop to Ben Litt, Rose Litt, Catherine Dare and Jack Dare. Brother of the late Anita McNutt and the late Donald C. Dare. Also surviving are several nieces, nephews and very close friends. In his youth, Jack was a star football player and won the Brooks-Irvine All-South Jersey Award in 1955. After high school, Jack went on to complete a Tool and Die Maker Apprenticeship and built a successful career, including 20 years with RCA/GE/Lockheed Martin in Moorestown until retirement. He continued with his own small business until the age of 75. Jack was an avid golfer, fisherman and gardener, often with his children and grandchildren by his side. Whether it was teaching them to ride a bike, play chess, or sneaking off to Dredge Harbor for a hot dog and milkshake, he was always with his grandchildren. He cherished golf trips with Janice to The Homestead, Sea Island, and many other destinations. He also treasured his friends and many fond memories at the Moorestown Field Club, and Riverton Country Club where he was a member for the past 20 years. A gathering of family and friends will be held Saturday, November 13th, from 9 a.m. to 10 a.m. at the First Presbyterian Church of Moorestown, 101 Bridgeboro Road, Moorestown, NJ 08057. Jack’s Memorial Service will begin at 10 a.m. Inurnment will follow at Lakeview Memorial Park.  In lieu of flowers, memorial contributions may be made to The Samaritan Center at Voorhees and First Presbyterian Church of Moorestown. To share your fondest memories of Jack, please visit www.givnish.com.

John &#8220;Jack&#8221; T. Dare passed away peacefully on Thursday, November 4, 2021 with his family by his side. Born in West Pittston, PA to Lawson S. and Esther P. Dare, Jack was 85 years old. Jack grew up in Bellmawr Park, NJ and moved to... View Obituary & Service Information

The family of John T. Dare created this Life Tributes page to make it easy to share your memories.

Send flowers to the Dare family.