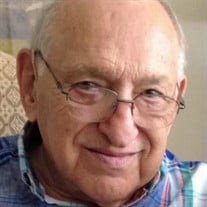 John A. Feroli, a long-time resident of Aberdeen MD, recently of Parkville MD, died peacefully on November 19, 2021 at Samaritan Hospice, Voorhees, NJ. John was a former mayor of Aberdeen and a research and development supervisor at Aberdeen Proving Ground. Born October 11, 1922, in Brockton, MA, he was the son of Albert and Mary (nee Giberti) Feroli. After graduating from Brockton High School, he received a scholarship to Massachusetts Institute of Technology (MIT) where he obtained a degree in engineering. His education was temporarily interrupted by military service in World War II, which included a tour in Panama. John ultimately attained the rank of Lieutenant Colonel in the U.S. Army Reserve. He also received an MBA from George Washington University. John worked 33 years at Aberdeen Proving Ground where he became a division chief. He was an expert in the field of ordnance testing. As such, he served on many Army, Navy, Air Force, and international committees. In his early years at APG, John became a specialist in the field of nuclear weapons. He participated in the last above-ground nuclear detonation at the Nevada test site. He also played a role in planning a nuclear research reactor for APG. John was recognized for his outstanding work by receiving the Maryland Civil Servant of the Year Award and the Army’s second-highest civilian award, the Meritorious Civilian Service Medal. John was also active in his community. This included being president of the Aberdeen Lions Club and the local PTA. His membership on the Aberdeen Planning and Zoning Commission was followed by election as an Aberdeen Town Commissioner, including one year as Mayor. For many years he served as an election judge. He was also treasurer of the APG Federal Credit Union. After retirement, John was a substitute teacher in Harford County public schools, a volunteer for FISH providing food for the less fortunate, and an AARP volunteer providing income tax assistance to the elderly. He was also active as an usher for 45 years at St Joan of Arc church in Aberdeen. John enjoyed playing golf and tennis, and traveling with his wife. They traveled around the country and to places as far as Europe, China, Egypt, and Turkey. John was predeceased by his beloved wife of 62 years, Elizabeth (nee Pitt). He is survived by two brothers Robert and Edward (Maureen). He is predeceased by his siblings Alfred Feroli, Louise Iafrate and Gloria Waters. He is survived by his children, Joan Hasenmayer (Joseph) of Medford, NJ, Susan Staddon (James) of London, England, and Thomas Feroli (Margaret) of Columbia, MD. He is survived by his grandchildren James Hasenmayer (Melissa), Kathryn Smaniotto (John), Karen Yerardi (Michael), Thomas Staddon, Michael Staddon, Daniel Feroli, and David Feroli (Marie). He is also survived by his great grandchildren Norah and Audrey Hasenmayer, John and Ethan Smaniotto, and Joseph Yerardi. A funeral mass of remembrance will be held on Monday, December 6 at 11:00 a.m. at St. John the Evangelist Roman Catholic Church in the Wilde Lake Interface Center, Columbia MD, with family welcome at 10:30 a.m. In lieu of flowers, please donate to a charity of your choice.

John A. Feroli, a long-time resident of Aberdeen MD, recently of Parkville MD, died peacefully on November 19, 2021 at Samaritan Hospice, Voorhees, NJ. John was a former mayor of Aberdeen and a research and development supervisor at Aberdeen... View Obituary & Service Information

The family of John A. Feroli created this Life Tributes page to make it easy to share your memories.

John A. Feroli, a long-time resident of Aberdeen MD, recently...

Send flowers to the Feroli family.