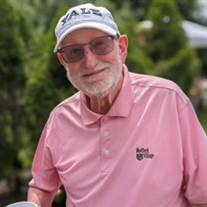 John J. O’Donnell, affectionately known as Jack or Big Guy to those who loved him, died peacefully at home in Marlton with his family by his side on February 11, 2022. Born in 1941 in Philadelphia to the late Mary O’Donnell Rowland (nee McIntyre) and John J. O’Donnell, Jack was the beloved husband of Elizabeth L. “Betty” O’Donnell (Lodge) for 50 years. He was the loving father of Katheen Warren (Josh), John O’Donnell (Allyson), Michael O’Donnell (Danee’) and Liz Brescia (Joe). Doting grandfather of Kaitlin and Colin Sullivan, Olivia, Ben and Lily Warren, Hayden, Eli and Bryce O’Donnell, and Conor and Jake O’Donnell. He was the dear brother of Marianne O’Donnell, Tom O’Donnell (Carol), Bill O’Donnell (Connie), Karen Michaluk (Leo), Kevin O’Donnell (Barbara), and the late Michelle Gladney (Jim); and Brother-in-Law of Frank Lodge (Madeline) and Barbara Hilyard (Kevin); and was predeceased by his stepfather Jonathan Rowland. Jack grew up the oldest boy in a family of 7 children, living in the Hill Creek area of Philadelphia in St. Ambrose Parish. At the age of 10, the family moved to Riverside, New Jersey. Jack attended Camden Catholic High School and then transferred to Riverside High School, where he ran Track, a sport in which he later enjoyed watching his children and grandchildren compete. Jack attended Trenton State College and later graduated with a bachelor’s in business administration from Rutgers University in Camden, NJ. Jack continued a family tradition of military service by joining the Air Force Reserves in 1963. He was activated to serve in Vietnam as an electronics technician in 1967, and served active duty in the Air Force through 1969. Upon returning from Vietnam, Jack joined the Collingswood Catholic Club. Jack served as President of the club, and it was there that he made lifelong friends and met his wife, Betty. Jack and Betty married on August 7, 1971 at St. John’s in Collingswood. They lived in Audubon, NJ where their daughter Kathleen was born. They then moved to Medford, NJ in 1976 and raised their growing family with the births of John, Michael and Elizabeth. Jack particularly loved being on the sidelines for his children as they competed in soccer and track, and would travel near and far to be in attendance. Jack spent his career in the industrial filtration industry which was an early effort in pollution protection. He worked at W.W. Criswell and Ametek where he traveled in sales. Jack and Betty also owned a company called DOCS (Doctors Office Computer Systems) in the early 1980’s. Jack then went on to open Industrial Environmental Products Corporation in Riverside, NJ. He finished his career at Fabrics for Industry in 2009, before moving on to his favorite role as Grandpop. Jack was an ever-present part of his grandchildren’s lives, watching their concerts or shows, driving them to activities, playing games with them or cheering them on in sports. He wanted to share in every moment he could. He was so proud of each of his children, in-laws and grandchildren and spoke of them often with loving pride. Jack was known as a talker and could quickly make a friend of a stranger. When he asked you how you were doing, he really wanted to know more about your life and surely had some stories to tell you about his. He was the life of the party and was often the first to take a spin on the dance floor. Jack loved flowers. In springtime, he enjoyed taking drives to see the flowers and trees in bloom. His yard was filled with beautiful flowers and trees, and he couldn’t wait to show off his latest blooms to those who visited. He was also so dedicated to caring for his backyard pool because he knew that was where his family loved to gather. Jack loved sports of all kinds, including his Philly teams, Big 5 basketball and of course participating in the Family Fantasy Football League. Above all, Jack had a particular love of high school sports. Jack was an avid newspaper reader and was known to quote statistics for high school athletes across our region. It was never a surprise to see Jack in the stands of a local soccer match or track meet rooting on the teams. In 2021, Jack was overjoyed to celebrate his 80th birthday and his 50th Wedding anniversary with his beloved wife. He was a devoted husband who was so proud to be married to his “Bet”. Jack was so loved by his family and friends who will miss him tremendously. Please join us to honor and celebrate his life. Relatives and friends are invited to gather at Givnish of Marlton, 398 East Main St., on Monday evening February 14th, from 6 pm to 8 pm. His Mass of Christian Burial will be on Tuesday February 15th, at 11 am at St. Mary’s of the Lakes Parish, 40 Jackson, Rd., Medford. Please see below for directions to church due to recent road closures. Interment will follow in Colestown Cemetery, 100 King Highway, Cherry Hill. In lieu of flowers, donations in Jack's memory may be made to St. Mary's of the Lakes School, https://www.parishgiving.org/lnkpayment;DPLID=687F3712AEA4C18A1D38C272F6505F25609EFEA3A4B9D7B18AD29D7B26027704CF5F3BB4D01FF8BA **** Please note the Jackson Road is is closed coming off of Tuckerton Road or Lakeside Drive. The funeral home will be using the following route to get to St. Mary's Parish: going left onto Main Street towards Walden Road. Main Street turns into Tuckerton Road. Make left onto Taunton Road. Bearing right onto Himmelein Road. Right onto Stokes Road. Right onto Jackson Road. St. Mary's will be on our right.

John J. O&#8217;Donnell, affectionately known as Jack or Big Guy to those who loved him, died peacefully at home in Marlton with his family by his side on February 11, 2022. Born in 1941 in Philadelphia to the late Mary O&#8217;Donnell Rowland... View Obituary & Service Information

The family of John "Jack" O'Donnell Jr. created this Life Tributes page to make it easy to share your memories.