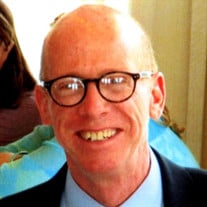 John T. McInerney, Jr. passed away peacefully on Thursday, August 26, 2021 at his residence surrounded by his family, following five challenging years living with Early Onset Alzheimer’s. Born in Philadelphia to John T. And Patricia McInerney, Sr., John was 63 years old. He was a resident of Cinnaminson since 1991 and formerly lived in the Oxford Circle section of Philadelphia. Beloved husband of 34 years to Susan C. (nee Walsh) and loving father of Frances, Sarah, and John, III. Loving son of Patricia and the late John T. McInerney, Sr. Brother of Jean Marie (Marc) Myzal, Paul (Madeline) McInerney, and Kate (Jim) Lambert. Also surviving are many nieces and nephews. John was raised in Saint Martin of Tours Parish and was a ‘76 graduate of Fr. Judge High School. He studied at LaSalle University and received his Associates Degree in Nursing at Gywnedd Mercy, where he met Susan. He was employed by Einstein, Cooper, and Temple University hospitals as an Emergency Room Nurse Manager and later in Nursing Informatics. John was an avid Philadelphia sports fan and thrilled beyond belief of his Eagles finally winning the Super Bowl. John participated in the Broad Street Run over 10 years alongside his daughter Frances. John shared his love of classical and jazz music with his daughter Sarah. Throughout his son John’s childhood, he coached many sports teams, most memorably The Sonics. John valued his many long-lasting friendships from grade school, Father Judge, Sea Isle, and Cinnaminson. A gathering of family and friends will be held Sunday from 6-8 p.m. and Monday 9:30-10:30 a.m. at Givnish of Cinnaminson, 1200 Route 130 North. John’s funeral mass will follow 11 a.m. at Sacred Heart Church, Riverton, NJ 08077. In lieu of flowers, memorial contributions may be made to The Tender (www.thetender.org), an adult day program where John attended To share your fondest memorial of John, please visit www.givnish.com

The family of John T. McInerney Jr. created this Life Tributes page to make it easy to share your memories.

Send flowers to the McInerney family.