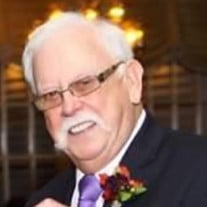 Joseph B. Bryce, Sr., 80, of Burlington, NJ, formerly of Philadelphia, PA, passed away in the arms of his loving and devoted wife at their home on November 8, 2021. Joe is survived by his true companion and beloved wife of 59 years, Joanna (Oberholtzer) and their three children, Ann-Mary Bryce, Jeanine Bryce (Michael Geppert) and Joseph B. Bryce, Jr., their three grandchildren, Jamie Barci-Bryce, Hillary Rupert (Richard Rupert) and Crystal Johnson Sabo and their treasured three great-grandchildren, Aiden Johnson, Kailyne Sabo and Scarlett Rupert. Joe was born in Philadelphia in 1941 as the middle son to his parents Benjamin Bryce (1906-1984) and Marietta (McLaughlin) Bryce (1913-1968). He is predeceased by his older brother, Edward (1939-1992). He is survived by his younger brother, James (Catherine). He is also survived by his sisters-in-law and their spouses, Jeanine Lynn Dolan (Arthur) and Kathryn Valentine (Raymond). He is predeceased by his mother-in-law, Mary Louise McKee Oberholtzer, sisters-in-law, Margaret Ackley (George) and Patricia Mercurio (Dominic) and brother-in-law, John Nicholas Oberholtzer and his cherished godson and nephew, Raymond (Randy) Ackley. He will be missed by many wonderful cousins, nieces, nephews and friends and by loving and caring family friend, Sandra Winters. He is predeceased by many of his friends and family members. Joe was a hard-working, honest, loving, caring, smart man. He was so wise that many people sought his advice and guidance. When Joe and Joanna met they were 17 and 14 respectively and it was immediate love, respect and admiration for each other. They truly enjoyed each other’s company and were best friends, throughout their lives they continued to nurture each other, hold hands and express love in all kinds of ways. He loved his wife, and his children, grandchildren and great grandchildren unconditionally. He loved spending time with Joanna above anything else, but he also loved food, chocolate chip cookies, beer, whiskey, bluegrass music, fishing, and especially traveling in his RVs with his family and more importantly his wife whether they were traveling near or far, whether it was for long weekends, week-long trips or months at a time. Joe and Joanna visited almost every State, every National Park and every National Monument from the east coast to the west coast, from the north to the south. He is self-taught playing the banjo, mandolin, mouth harp, harmonica and guitar. Joe was proud to be a member of Sheet Metal Union, Local 19 and in 1965 became a Journeyman Mechanic. He took great pride in his work, often pointing out buildings and skyscrapers that he worked on during his career. He mentored many apprentices throughout his career and even in retirement would be a speaker and mentor to the new apprentices. He was a proud member of the Retirees Club of Local 19 and cherished his friendships with the men he worked with throughout his successful career. In retirement he joined Fralinger String Band building props and walking down Broad Street as a marshal and was best known as the "proptologist." He absolutely loved being involved in building the props for Fralinger and the camaraderie of the other prop builders and marshals. During his tenure as "the proptologist" Fralinger won an unprecedented eight (8) consecutive first prizes. Several Fralinger members made it clear to his family that Joe was an integral part in steering the organization through the most successful time in Fralinger history. Although his unmatched ability to design and construct props stood out, they also benefited from Joe's ability to be a friend, mentor and leader. Joe and Joanna’s dream together was to own a farm house and have horses and other livestock. In 1971 they bought an 1882 farm house that they would drive by when visiting their horses in Burlington. His family and friends spent weekends for 9 years going over to "Jersey" helping renovate the farm house before the family officially moved in, in 1979. Joe never sat still, he was always doing something, traveling, tinkering around his home, taking care of his garden or lawn, tending to his animals, building a two story garage, mentoring Sheet Metal apprentices, building props for Fralinger, restoring a 1952 Massey Harris Tractor ("Rusty"), helping family members or attending the functions of his children, grandchildren, great-grandchildren and family and friends. Joe was an honest man, had a straightforward personality and was loved for his jokes - - and he had jokes. He saw humor in almost everything and was able to make anyone laugh. He also had the “gift of gab” and could talk to anyone and would talk to anyone. He passed that trait onto his children and grandchildren, I’m sure we’ll see it in his great-grandchildren soon enough. The world is a sadder place without him. A gathering of friends and family will be held on Saturday, November 13th at Givnish of Cinnaminson, 1200 Route 130 North, from 9 to 11am with his funeral service following at 11:00am. Masks are required. Interment will follow at Lakeview Memorial Park in Cinnaminson. In lieu of flowers, donations may be made to Forgotten Angels Equine Rescue, http://faernj.com/ or St. Jude’s Hospital for Children or Wounded Warriors or, to Shriner's Hospital https://donate.lovetotherescue.org/giving, or to a charity of your choice. For more information, please visit Givnish.com

Joseph B. Bryce, Sr., 80, of Burlington, NJ, formerly of Philadelphia, PA, passed away in the arms of his loving and devoted wife at their home on November 8, 2021. Joe is survived by his true companion and beloved wife of 59 years, Joanna... View Obituary & Service Information

The family of Joseph B. Bryce Sr. created this Life Tributes page to make it easy to share your memories.

Send flowers to the Bryce family.