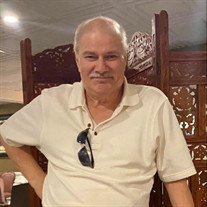 Joseph S. Keough of Cinnaminson, NJ, passed away peacefully surrounded by family on September 12, 2021. Joseph is survived by his wife, Mary Keough (nee Kauffmann); his children, Ryan Keough, Colleen Keough, and Deanna Keough; grandchildren, Blaise and Briana; and sister Marie (Ben) Thau. Joseph was born on May 30, 1950, to the late Henry and Catharine Keough. He was raised in the Kensington section of Philadelphia where he graduated from Frankford High School in 1968. He then went on to serve six years in the U.S. Air Force as a member of the 313th Tactical Airlift Wing that earned the U.S. Air Force Outstanding Unit award for its many exemplary mission accomplishments and commended equally for its humanitarian roles of international significance. Joseph attended the Community College of Philadelphia and Rutgers University where he earned a bachelor’s degree in Business. Joseph worked as an SAP consultant for several companies, including IBM, Engility, and Raytheon where he retired from in 2016. During his dedicated career, Joseph received several awards for his outstanding performance and achievements. On May 6, 1978, he married his loving wife Mary and the couple moved to Cinnaminson, NJ where they raised their three children and became lifelong residents. Joseph will be remembered for his devotion to his family, his warm and gentle nature, his love of baseball specifically his Philadelphia Phillies, and the Jersey shore. He also had a love for all animals, especially his dog Buster. Joseph had an appreciation for the simple things in life, but his greatest joy was his children and grandchildren. A gathering of family and friends will be held this Thursday from 9:30 a.m. to 11 a.m. at Givnish of Cinnaminson, 1200 Route 130 North. Joe’s Funeral Service will follow 11 a.m. Interment with Military Honors, will follow at Lakeview Memorial Park. In lieu of flowers contributions may be made in Joe’s memory to the American Heart Association. To share your fondest memories of Joe, please visit www.givnish.com

The family of Joseph S. Keough created this Life Tributes page to make it easy to share your memories.

Send flowers to the Keough family.