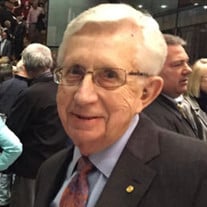 LEON A. (LEE) MANKOWSKI, ESQUIRE of Audubon formerly of Valley Forge, passed away peacefully on Monday, January 28th. He was 84 years old. Son of the late Regina Czyzewski and Leon T. Mankowski, beloved husband of 57 years to Veronica (Bonnie Manno) Mankowski; Loving Father of Michael (Jennifer), Diane, Susan (Sanjiv Dhanjal). Pop of Alexander, Benjamin, Jonathan Mankowski and Roan Dhanjal. He attended St. Adalbert’s School, St. Joseph’s Prep, and earned degrees from St. Joseph’s University (1956) and Villanova Law School (1959) where he was a member of the Editorial Board of the Villanova Law Review. He was a 50-year member of the Philadelphia and Pennsylvania Bar Associations and was admitted to practice before the Supreme Court of the United States. He practiced law in Port Richmond since 1970 and enjoyed serving the community, where he was born, raised and schooled. He served in the Pennsylvania Air National Guard and the Air Force Reserve. The Law Alumni Chapter of St. Joseph’s University awarded him the McClanaghan Award in 1999, for his service to its Board of Directors. He was a Phillies and Eagles fan, enjoyed college basketball (especially “March Madness”) and Little League (he coached in the 1970’s) especially when it involved his grandsons. In his younger years, Lee instructed Business Law at Manor College and served as a neutral Arbitrator in disputes between insureds and their carriers. A younger brother, Ron, who expired in 1990 was a moving force in his life. Another brother, Dan whose talents eclipsed of the decedent, survives. Friends are invited to attend a Funeral Mass at St. Teresa of Avila Church 1260 S. Trooper Road, Norristown PA on Saturday, February 2, 2019 at 10:00 AM and may call after 8:45 AM. Internment private. In lieu of flowers, contributions in his memory may be made to St. Joseph’s Preparatory School, 1733 West Girard Avenue, Philadelphia, PA 19130, St. Joseph’s University, 30 Lapsley Ln, Merion Station, PA 19066, Villanova University Charles Widger School of Law, 299 North Spring Mill Road Villanova, PA 19085. To share your memories of Lee, please visit www.givnish.com

The family of Leon “Lee” A. Mankowski created this Life Tributes page to make it easy to share your memories.

LEON A. (LEE) MANKOWSKI, ESQUIRE of Audubon formerly of Valley...

Send flowers to the Mankowski family.