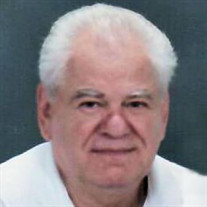 Leopold “Leo” Humski, age 85, passed away at his home in Maple Shade, NJ on January 16, 2021. Leo was born in Zagreb (former Yugoslavia), Croatia to the late Leopold and Milka Humski. Leo is survived by his beloved wife of 63 years, Stephanie Humski (nee Mikelec); his loving sons, Sasa and wife Donna, and Robert and wife Marianne; his cherished grandchildren, Alec, Scott, Brad, and Taylor; and dear sister, Katarina Markovac. Leo was predeceased by his sister Vera Humski. In his youth, Leo played trumpet and sang with a musical troupe touring Italy, France, Germany, Switzerland, Austria and Russia. Here he met Stephanie. They married in 1958. In 1971 Leo left Zagreb, then communist Yugoslavia, and came to the US. He then worked to bring Stephanie, Sasa, and Robert to the US permanently. The family settled on South Maple Avenue and remains there today. Leo worked at H&E Tool from 1971 until his retirement in 2000. Working on many complex medical instruments, his favorite work was hand crafting triangles for the Philadelphia Symphony Orchestra. He was very artistic, creating many iron pieces for his home and as gifts. An avid tennis player, Leo and Stephanie played doubles at the Deptford Tennis Club. Many nights were filled with pinochle games with neighbors and friends. There were always good drinks, laughter and double checking the score. Pillow fights with his favorite people, his grandchildren, will always make us smile. His love of travel took him to many destinations as well back to his family and friends in Croatia. Leo loved to go out dancing anytime, but especially on New Year's Eve. Music was always playing, but his favorite was jazz. He loved all animals. His German shepherd, Heidi, rarely left his side. Services for Leo will be private for his family. In lieu of flowers, the family requests donations to the South Jersey Regional Animal Shelter, www.southjerseyregionalanimalshelter.org; your local Humane Society/SPCA or The Jefferson Nicoletti Kidney Transplant Center in Leo’s honor, www.giving.jefferson.edu, and specify Nicoletti Kidney Transplant Center.

The family of Leopold Humski created this Life Tributes page to make it easy to share your memories.