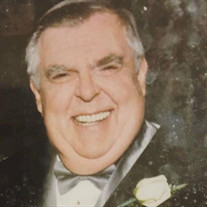 After a life well lived, Leroy O. McClellan passed on to his eternal heavenly home on August 19th, 2021. Aside from time spent serving our country as a member of the United States Army, stationed in Okinawa, Leroy spent the entirety of his life in the Riverton and Cinnaminson area and had a deep appreciation and sense of loyalty to his hometown. Leroy, known as Lee by those closest to him, was born on November 1st, 1939. He graduated from Palmyra High School in 1957 and then went out to serve our country in the United States Army – Defense Language Institute, performing classified work as a Mandarin interpreter during the Vietnam War. Upon his return home, Lee received a B.A. in Economics from the University of Pennsylvania in 1967 and then continued his academic journey receiving his M.A. in Economics from Temple University in 1971. Lee began his career in the banking department at The Philadelphia Saving Fund Society (PSFS) in 1957, holding many key positions with PSFS until his departure in 1982. He then went on to hold similar positions in the industry until his retirement in 1995 from The Penn Mutual Life Insurance Company as the Assistant Vice President – Private Placements. Throughout his life, Lee was a dedicated member of the Free Masons Concordia Lodge 67, Jenkintown, Pennsylvania. During his tenure with the Free Masons, he was a Past Master and also served as Secretary for a number of years. Lee was an incredibly brilliant man, who could finish the NYT Crossword in the blink of an eye and his remarkable wit, dry sense of humor, and gregarious nature, accentuated by a booming laughter that was infectious, were the hallmarks of his personality. Lee was a devoted husband, father, grandfather, son, brother, and friend to those fortunate enough to know him. He will be deeply missed, but our hearts will remain comforted by the cherished memories he filled our lives with while we were blessed to have him here with us. He is preceded in passing by his wife Evelyne McClellan, Mother, Edna McClellan, and Brother, Kenneth McClellan. He is survived by his sons, Mark (Susan) Schreiber, Bruce (Melissa) Schreiber, and Granddaughter, Victoria Schreiber. Memorial Services will be held at a later time.

After a life well lived, Leroy O. McClellan passed on to his eternal heavenly home on August 19th, 2021. Aside from time spent serving our country as a member of the United States Army, stationed in Okinawa, Leroy spent the entirety of his... View Obituary & Service Information

The family of Leroy O. McClellan created this Life Tributes page to make it easy to share your memories.

After a life well lived, Leroy O. McClellan passed on to his...

Send flowers to the McClellan family.