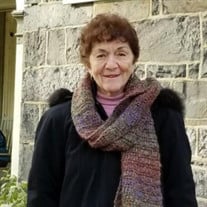 &#8220; Stop all the clocks, cut off the telephone, Prevent the dog from barking with a juicy bone, Silence the pianos and with muffled drum, Bring out the coffin, let the mourners come&#8230;&#8221; W. H. Auden A remarkably rare event has taken... View Obituary & Service Information

The family of Louise Grena created this Life Tributes page to make it easy to share your memories.

“ Stop all the clocks, cut off the telephone, Prevent the dog...

Send flowers to the Grena family.