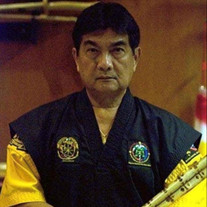 Luis R. Lledo, Jr. passed away peacefully on Wednesday, April 20, 2022 at Virtua Hospital in Willingboro, NJ. Born in Zamboanga City, Philippines to Luis and Juana Lledo, Luis was 73 years old. After Luis graduated from Ateneo de Zamboanga High School, he went on to study B.S. Medical Technology at Far Eastern University in the Philippines. He graduated with a degree in Medical Laboratory Science.  Lledo also had the passion for Martial Arts and had the unique opportunity to train with the seniors of the Japan Goju-ryu group under the watchful eyes of Grandmaster Gogen Yamaguchi. Due to his diligence and skill in the fighting arts, he was promoted to the 4th Degree Black Belt in Karate in the same year. In 1975, Lledo was accredited as the first youngest international referee by the World Union of Karate-Do Organizations. (WUKO), the world ruling body in Karate and was called upon to officiate in the Third World Karate Championships held at Long Beach, California. In recognition of his skill also in stick fighting, Remy Presas awarded Lledo the 5th Degree Black Belt in Modern Arnis. Lledo’s ultimate goal in establishing the system was to develop a person’s character through the rigid and strict discipline required in training in the fighting arts. To give the system his personal touch and to reaffirm its ultimate goal, Lledo named the art Amara Arkanis. The State Colleges and Universities Athletic Association (SCUAA) Region IV voted Lledo president of the SCUAA Martial Arts Organization while The International Modern Arnis of the Philippines, founded by Remy Presas, appointed Lledo Regional Commissioner. Lledo held the rank of captain in the Philippine Air Force Reserves. He traveled around the Philippines giving instructions and seminars in the Amara Arkanis School of the Filipino Fighting Art.  He was also Chief Combat Instructor of the 1st Air Division and the 304th Security Squadron of the Philippine Air Force. In January 2003, Lledo was bestowed the Grandmaster of the Year Award of the Filipino Fighting Arts, by the Action Martial Arts Magazine Hall of Fame.  For his extensive work preserving and promoting Filipino Martial Arts in the United States, Luis Rafael ‘Louelle’ Lledo, Jr. received an unexpected award from one of the most powerful men in the free world. President Barack Obama awarded the Arnis master (who is more commonly referred to as Mataw Guro Lledo) the President’s Volunteer Award, for his tireless work of teaching Filipino martial arts to various groups and communities in America. He is survived by a loving family: His wife, Flora (nee Bernarte), his daughters Kat Lledo and Kristine L. Velasquez. His son in-law Erick Velasquez and grandson, Dave Colin Velazquez. Also a loving brother of Lester Lledo and brother-in-law Michael Bouchard. Funeral services were held privately for the family. In lieu of flowers, memorial contributions may be made to: John Hagee-Daystar donation for Ukraine. “It’s not the style, but the person” Luis Rafael Lledo Jr. Feb.12, 1949- April 20, 2022

The family of Luis R. Lledo Jr. created this Life Tributes page to make it easy to share your memories.

Send flowers to the Lledo family.