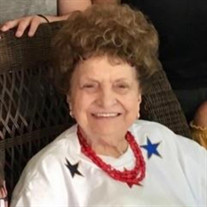 Marguerite Salette (Vicario) Schive was born on July 4, 1927, in Philadelphia, Pennsylvania, to Michaelangelo Vicario and Maria Salette Galante, the youngest of eight children. She married Clarence Albert Schive, Jr., on June 10, 1957, in Alexandria, Virginia. As a military bride, she followed her husband to Bermuda, Nebraska, and Virginia, until they settled closer to home in Edgewater Park, New Jersey. Marguerite was a devout Catholic, and belonged to Corpus Christi Parish in Willingboro, New Jersey. She volunteered with several charities, but dearest to her heart was the Saint Francis Inn in Philadelphia. Marguerite was preceded in death by her parents, her husband, all of her siblings, five nephews, and a grandson. She is survived by five children, Clorinda (Dennis) Moore, Salette (David) Andrews, Robert Schive, Judy Schive Wagner, and Laurie (Mike Morgan) Schive. She is also survived by twelve grandchildren, one great-grandson, one sister-in-law, and numerous nieces and nephews, to whom she was "Aunt Marge." Marguerite died on November 4, 2020, in Camden, New Jersey, at the age of 93, although she would not want you to know how old she was. A service celebrating Marguerite’s life will be held at a later date.

The family of Marguerite S. Schive created this Life Tributes page to make it easy to share your memories.

Send flowers to the Schive family.