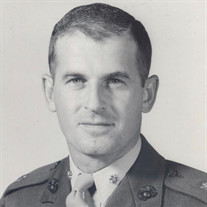 Col. Martin Eugene O’Connor, USMC (Ret.), husband, father, grandfather, Marine, and patriot, passed away peacefully in Mt. Laurel, NJ on December 4, 2021, at the age of 88. He was predeceased by his wife Nancy Lee O’Connor (nee McCaw), originally from Trenton, NJ. He is survived by four children and their spouses; Christopher, and his wife Nancy, of Pittsford, NY; Kevin, and his wife, Becky, of Corolla, NC; Tracy O’Connor Hillman and her husband, Noel, of Moorestown, NJ; and Craig, and his wife Charlene, of Wake Forest, NC; as well as eight grandchildren, Ryan, Caitlyn, Sean, John, Andrew, Paige, Caroline and Lauren who adored their “Grampo.” “Marty,” as he was known in his later years after surviving an earlier nickname of “Bing”, was a highly decorated Marine combat veteran of the Vietnam War, whose service spanned 31 years. His career was highlighted by numerous significant command, operations, and teaching positions within the Corps. Born in Rahway, NJ, he was commissioned as a Second Lieutenant soon after graduating from Rider College. After Basic Training, he was deployed to Camp Pendleton, CA where he trained in Special Warfare Operations, including paratrooper instruction and later scuba. He began sea duty as the Executive Officer of the Marine Detachment on the USS Oklahoma City, the flagship of the 7th Fleet. He was promoted to Captain and deployed on his first tour in Vietnam as commanding officer of Company “H”, 2nd Battalion, 7th Marines. After a stint as an inspector-instructor for the 4th Reconnaissance Company, Force Troops, in San Bernardino, CA then Major O’Connor began a second tour in Vietnam as a combat advisor to the Vietnamese Marine Corps. After Vietnam and graduation from the Armed Forces Staff College, Norfolk, VA, he was assigned to the Pentagon where he served in the Office of the Secretary of Defense, International Security Affairs. Likely unhappy behind a desk, Marty was pleased that his promotion to Lieutenant Colonel coincided with his assuming command of the 2nd Reconnaissance Battalion, 2nd Marine Division, followed by command of “The Warlords”, the storied 2nd Battalion, 2nd Marine Division (“2/2”), Camp Lejeune, NC. After service with the 2/2 in the Mediterranean, he graduated from the Naval War College, Newport, RI and became the Marine Corps Representative to, and joined the Military Faculty of, the National Defense University, Fort McNair, Arlington, VA. After promotion to full Colonel he returned to a command position overseas, leading the 4th Marine Regiment, 3rd Marine Division, FMF Pacific, in Okinawa, Japan. After final service in the Pentagon as the Chief, National Military Command Systems Operations Division of the Joint Chiefs of Staff and Assistant Inspector General of the Marine Corps, he retired to Old Town, Alexandria, VA in 1987. While Marty’s military career is remarkable, what distinguished him was his courage and willingness to sacrifice his own safety for others. A true war hero, he was personally responsible for saving over a hundred lives in Vietnam in the face of grave danger and personal risk. For numerous acts of heroism in combat and his exemplary leadership, his decorations include the Navy Cross, the Department of the Navy’s highest award for heroism; the Silver Star; Defense Meritorious Service Medal; two Legions of Merit with Combat “V”; Purple Heart; Presidential Unit Citation; two Navy Unit Commendations; the National Defense Service Medal, Combat Action Ribbon; Vietnam Service Medal with Bronze Star; the Vietnamese Cross of Gallantry with Palm; Vietnam Honor Medal, First Class; Vietnam Presidential Unit Citation with Palm. Marty was also truly compassionate and was awarded the Vietnam Humanitarian Service Medal for evacuating refugees to safety. He was presented the key to the City of San Bernardino for the care and sensitivity he showed as the Officer responsible for informing families of the combat loss of a loved one. He managed Toys for Tots campaigns in Southern California and served as a Boy Scout Master and community volunteer. A natural athlete, Marty completed the Marine Corps Marathon twice and loved the outdoors and physical activity. Over 50 years ago, he and Nancy started the ongoing tradition of annual stays in the Outer Banks where they watched their children and grandchildren grow up and enjoy the ocean. In retirement, he enjoyed bicycle touring and cross-country skiing with Nancy and was involved with her in the Old Town Civic Association, the Walled Garden Club, and Yates Gardens neighborhood activities. Marty will be interred on February 8, 2022 at Arlington National Cemetery alongside his beloved Nancy. Those wishing to make a donation in Marty’s honor are asked to consider the Semper Fi Foundation. May God bless his soul and grant him His eternal peace.

The family of Col. Martin Eugene O'Connor USMC (Ret) created this Life Tributes page to make it easy to share your memories.