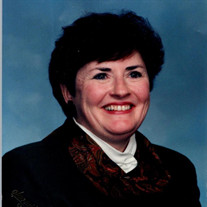 Mary Ann was born on January 19, 1944, the second child of Michael and Mary Ann (Howley) Gavaghan from County Mayo, Ireland. Her birth was preceded by that of her brother Michael, and she was later joined by her sister Catherine (Cassie) and brother Eddie. They lived across the street from St. Edmond's Church in South Philadelphia where Mary Ann received her First Communion and Confirmation. Mary Ann attended St. Edmond's school and St. Maria Goretti High School (SMG) from which she graduated in June, 1961. Having some musical ability, she was a member of the school orchestra in which she was a violinist for four years. At home, she attempted to teach her younger brother Eddie the piano but apparently was not too successful since Ed never made the concert stage. Upon graduation from SMG, she began working at the Atlantic Refining Company in South Philadelphia where she began her career in human resources. When, after a number of years, Atlantic moved its headquarters to California, Mary Ann opted to remain in the Philadelphia area. She returned to school full-time to pursue her degree in Business Administration at Holy Family University and graduated in May 1981. She began working for Tyco Toys in Moorestown in human resource management and eventually become the Vice-President of Human Resources. She loved the job and the people who worked there, and she impacted the lives of many employees at Tyco. After about 17 years at Tyco, when they were acquired by Mattel and moved many operations to California, she chose to remain in this area. This led to a position at CCL label in Hightstown, NJ. After several years at CCL she retired. Not long after retiring, she was diagnosed with Parkinson’s Disease. Mary Ann met Frank in January of 1962 and they were married in October of 1965 in St. Edmond's Church. At the time of her passing, they were married for over fifty-six years. She was in every respect a loving and caring wife, and theirs was a marriage that was filled with the joys, happiness but, also at times, the disappointments that are the hallmarks of a strong, enduring relationship. Even when she was diagnosed with the Parkinson’s disease over ten years ago, she was not given to complaining, but prayed that God would help her through it. She was devoted to the rosary and devotion to the Lady of the Miraculous Medal and recited the prayers every day. Mary Ann never sought the limelight. She was very lowkey and quiet. What she achieved, she achieved by hardwork and diligence. She had a good sense of humor with a sparkling smile that could light up the room. She enjoyed cooking and sewing and especially teaching Frank how to do some cooking, with questionable success. She enjoyed the gathering of relatives and friends for holidays and many other occasions. She was very proud of the accomplishments of her three nieces: Ellen, Ann and Carlyn, and hoped that in some way was a role model for them. She particularly enjoyed the company of her high school friends, with whom she maintained close relationships to the present time, and the "Tyco Babes", her co- workers from Tyco. Early on Sunday morning, May 8, 2022, Jesus, the Good Shepherd wrapped Mary Ann in His loving arms and brought her home to the heavenly kingdom to be united with her parents, her sister, her sisters-in-law, Pat and Kathleen, and many other relatives and friends who made the eternal journey ahead of her. She will be greatly missed by Frank and all those who knew her and whose lives she impacted in many ways. Please continue to remember her in your thoughts and prayers. Formal obituary: Mary Ann Herron (nee Gavaghan), 78, of Cinnaminson, NJ, passed away peacefully on May 8, 2022. Dear wife to Frank Herron for nearly 57 years. Beloved sister to Michael Gavagan (late Patricia), Edward Gavaghan (Arlene) and the late Catherine “Cass” Gavaghan. Loving aunt to Ellen Huber (David), Ann James (Andrew), and Carlyn Gavaghan. A gathering of friends and family will be held on Tuesday, May 17th at Sacred Heart Church in Riverton, NJ, from 9:45am to 11:45am, with her funeral mass following at 12:00pm. Entombment will follow at Lakeview Memorial Park. In lieu of flowers, donations may be made to Sacred Heart Church of Riverton, Samaritan Healthcare and Hospice, https://samaritannj.org/giving/donate-now/, or the Parkinson’s Foundation, Parkinsons.org Mary Ann's Mass and Committal Ceremony will be livestreamed and can be viewed with this link: https://www.viewlogies.net/givnish/q6gRK4OQb?pin=021747 If there are any technical difficulties, we will upload the service to her website later that day.

Mary Ann was born on January 19, 1944, the second child of Michael and Mary Ann (Howley) Gavaghan from County Mayo, Ireland. Her birth was preceded by that of her brother Michael, and she was later joined by her sister Catherine (Cassie) and... View Obituary & Service Information

The family of Mary Ann Herron created this Life Tributes page to make it easy to share your memories.

Send flowers to the Herron family.