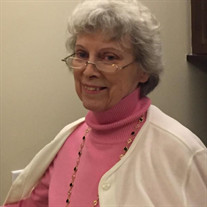 Muriel Ann Evans, of Haddonfield, NJ, passed away peacefully on January 4, 2022. She was 87 years old. She was preceded in death by her late husband Lawrence S. Fein, Sr.. They are survived by 4 children, Pamela (Todd) Fawcett Pressman, Kimberly (Anthony Manzoni) Fawcett, Laurel (Andrew) Zidney and Lawrence Jr. (Kristin) Fein. They also shared 6 grandchildren, Jillian, Sarah, Adam, Benjamin, Lucinda and Christopher. She is also survived by her sister Jill Evans, brother Jack (Nancy) Evans and their children. Her sister June Evans also preceded her in death. Muriel was born in Providence, R.I., on August 28, 1934 to Anna Bell J. Evans and William J. Evans. She attended East Providence High School and the New England Conservatory of Music, where she studied violin and piano. She moved to the Philadelphia area in 1961 with her former husband, James W. Fawcett, where she raised her family. She enjoyed close relationships with her many professional colleagues, with whom she worked as an administrative assistant, most notably with the Pennsylvania Ballet. In 1984, she married Lawrence Fein (Larry), and relocated to Washington, DC. Together they traveled the world, frequently to Paris and enjoyed a close network of friends. They relocated to Muriel’s home in Rhode Island for several years, where she was grateful to spend time with her parents, siblings, nieces and nephews, and friends. Muriel and Larry relocated to Haddonfield, NJ at the birth of Muriel and Larry’s granddaughter, Jillian. Muriel will be remembered for her kindness, gentleness, sense of values, and intellect. She was a lifelong lover and patron of the arts, and transitioned from this life listening to Brahms. Most of all, she loved her family. In lieu of flowers, contributions in Muriel's name can be made to Grace Hospice, 105 Fieldcrest Ave #402, Edison, NJ 08837.

Muriel Ann Evans, of Haddonfield, NJ, passed away peacefully on January 4, 2022. She was 87 years old. She was preceded in death by her late husband Lawrence S. Fein, Sr.. They are survived by 4 children, Pamela (Todd) Fawcett Pressman, Kimberly... View Obituary & Service Information

The family of Muriel Ann Evans created this Life Tributes page to make it easy to share your memories.

Send flowers to the Evans family.