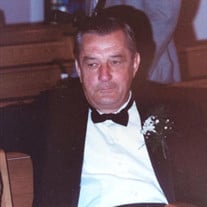 Pete Kostiuk’s heart gave out after a lifetime of being tugged, squeezed, wrenched at times, and stretched to the limit by his great love for his family. Pete, 90, of Brigantine, died Monday, Jan. 28 at AtlantiCare Regional Medical Center in Galloway surrounded by his wife, many of his 13 children and a handful of his 27 grandchildren. It’s hard to know whether he was able to find a minute of peace amid the whirling chaos that was the norm whenever his large brood gathered. Few men have left such a big mark on their world in such a quiet way. Born Peter John Kostiuk Nov. 12, 1928 in Piscataway, he was the youngest of five children born to Nicholas and Rose (Stebensky) Kostiuk, who were Ukrainian immigrants. Growing up in Dunellen during the Great Depression, he was 10 years old when he began scrabbling around for work, earning money here and there delivering newspapers and doing odd jobs for the town recreation department: mowing the sports fields, lining the tennis courts, and helping out the basketball coaches. It was here that he developed his lifetime love of sports. His biggest love was playing baseball, but it was basketball where Pete left his biggest imprint. As captain, he led the varsity team at small Dunellen High School in Middlesex County to a surprise state championship in 1946, a feat that earned Pete and his team the honor of being inducted into the school’s very first Hall of Fame class in 2001. Newspapers followed every step of the squad’s dream run to the title, nicknaming them the “Jive Five.” Though a man of few words, Pete was president of his senior class and voted most likely to succeed. He married his high school sweetheart, Joan Dillon, in 1950. He served in the U.S. Army as a draftsman during the Korean War. He went to college on the GI Bill, and was the first member of his family to graduate from college. He received a business degree from Rutgers University and had a long career selling stainless steel for Kenilworth Steel and then Jones and Laughlin Steel Corporation. He became an avid golfer who was in his element conducting business on the golf course. After living for many years in Fords, Pete’s career brought him to South Jersey, and he settled his growing family into a six-bedroom colonial in Cinnaminson, where they lived for more than 30 years. He and Joan wisely bought a summer home in Brigantine just before the casino boom, and the beach house became a mecca for family get-togethers, especially after their children started to marry and the family saw an explosion of grandchildren. When they outgrew the three-bedroom beach home, they raised the roof and added a third floor. The “Brigantine Hilton” was always open -- especially on holidays -- even if that meant sleeping children tangled up on every available bed, sofa and floor. Pete retired and they bought a condo overlooking the green at Countryside Golf Course and Country Club in Naples, Florida, where they happily spent many golden years as snowbirds, golfing and socializing in the winter and enjoying the Jersey shore in the summer. In 2015 they sold the house in Naples and took up year-round residence in Brigantine to be closer to family. Joan was moved into Spring Village in Galloway in September, followed by Pete a couple weeks later. Married just short of 69 years, Pete and Joan were blessed with 13 children: Jacqueline (died 2006), Janet (Paul Blaine), Peter (Ksenia Kulchycky), Joan (Bill Shutz), Jeff (Loan Ngo), Rosemary (Mark Mitchell), Camille, Michael (Kathy Wollschlager), Curt, Brian, Reenie, Randy and Claudia (Beau Adams). Pete welcomed each new grandchild and great-grandchild literally with open arms and doted on every one of them. The 27 grandchildren are Matthew (Kristin Shortmeyer), Bethany (Adam Stych), Melanie, Peter, Alex, Chelsea, Leia, Zack, Linh, Nicholas, Candace, Morgan, Marcus, Jordan, Samantha, Max, Mick, Mary, Arielle, CJ, Luke, Daniel, Randy, Anthony, Jackson, Chloe and Belle; and the four great-grandchildren are Evie, Jake, Amelia and Tylor. A viewing will be held 7-9 p.m. Friday, Feb. 1 at Givnish Funeral home, 1200 Route 130 in Cinnaminson. On Saturday there will be visitation 9:30-11 a.m. followed by a memorial service. Burial will be at Lakeview Memorial Park. In lieu of flowers, the family requests that donations be made to the Alzheimer’s Association at www.alz.org.

Pete Kostiuk&#8217;s heart gave out after a lifetime of being tugged, squeezed, wrenched at times, and stretched to the limit by his great love for his family. Pete, 90, of Brigantine, died Monday, Jan. 28 at AtlantiCare Regional Medical Center... View Obituary & Service Information

The family of Peter J. Kostiuk created this Life Tributes page to make it easy to share your memories.

Pete Kostiuk’s heart gave out after a lifetime of being tugged,...

Send flowers to the Kostiuk family.