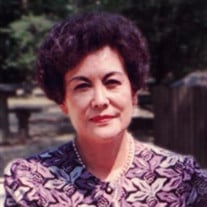 Reiko “Linda” Adams passed away on Sunday, December 13, 2020. She was 88 years old. Reiko was born in Japan in 1932 where she grew up as an avid athlete, student, eventually working as the Secretary to the Mayor of her hometown. In 1955 she met and eventually married Richard “Dick” Adams as he served in the USAF while stationed in Japan during the Korean War. She has three sons, Robert, David (both of Cinnaminson), and James (of Redondo Beach, CA). She has 8 grandchildren and 1 great-grandchild. For many in the Cinnaminson area, you may remember Reiko (or “Linda” as our dad gave her that nickname) as a rather petite, but passionate mother and baseball fan. As the only Japanese-American family in this small little town of Cinnaminson during the late ’50s and early ’60s, Reiko had to overcome language barriers, post WWII prejudices, and other challenges as a young mother raising three boys over 6,000 miles from where her family were still in Japan. She lived most of her life in Cinnaminson, with moves to Melbourne Beach and Singer Island, Florida, as well as the Redondo Beach area of S. California, before eventually moving back home to Cinnaminson where she resided for the last 6 years. She was the greatest cheerleader for her three boys, Robert, David, and James over the course of their entire lives. Not only was she the greatest baseball coach to her sons, but she became the most loyal fan of the sport of Motocross as her youngest son, Jimmy, endeavored to become a professional Motocross racer, until a career ending injury forced his early retirement. But it was actually during his forced early retirement that Jim shared the Good News of the Gospel of Jesus Christ. This set into motion a major change to the whole family, eventually becoming believers in the Lord and sharing the loving message of the Gospel, which was Reiko’s desire for her Japanese siblings and extended family as well. Now, Reiko has been reunited with her husband, Dick (who went to be with the Lord in Nov. 2014). We have a living hope in Christ, that we shall all meet together again, and "oh, what a glorious day that will be!" . . . She was loved by all and will be greatly missed. No public service is planned at this time. A private service will be held for family only at this time. Condolences may be sent to Givnish Funeral Home, Cinnaminson.

Reiko &#8220;Linda&#8221; Adams passed away on Sunday, December 13, 2020. She was 88 years old. Reiko was born in Japan in 1932 where she grew up as an avid athlete, student, eventually working as the Secretary to the Mayor of her hometown.... View Obituary & Service Information

The family of Reiko A. Adams created this Life Tributes page to make it easy to share your memories.

Send flowers to the Adams family.