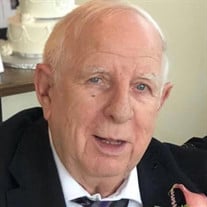 Richard Stewart Montgomery, of Mount Laurel, passed away peacefully with his family by his side on February 7, 2021. Born in Philadelphia, PA to the late John and Edwina Montgomery, he was 86 years young. Rich was the beloved husband of Olga Lucille Montgomery (nee Heins) for 62 years. He was the loving father of Ken (Mela), Richard (Marybeth), Robert (Kira), and Donna Lewbart (Keith). Cherished grandfather of Mekayla, Mekenzie, Mekenna, Mekelsey, Andrew (Nicolette), Marisa (Ryan O’Malley), Tim, Austin, Trevor, Tyler, and Ryan. Dear brother of the late W. Bruce Montgomery, and brother-in-law of Carolyn J. Dahl (late Norman), and the late Dr. Conrad P. Heins, Jr. Many nieces, nephews, extended family members and friends who will miss him tremendously also survive Rich. Rich graduated from South Philadelphia HS for boys where he played football and ran track, he later attended the Wharton School of Business at the University of Pennsylvania. He was employed by Esso (nka EXXON) and later ran the main computer center for Dow Jones, publishers of the Wall Street Journal. Rich retired from Dow Jones as an IT Budget Director after over 30 years of service. Rich was an avid Philadelphia Eagles and Phillies fan as well as the Philly Soft Pretzel. He also LOVED cheering for his children and later his grandchildren in their sports and activities. He was their biggest supporter and most loyal fan. Furthermore, he made his presence known to referees and umpires when he disagreed with them! Pop-Pop also rarely missed a family event or ceremony for his 11 grandchildren. Neither a cane, nor a walker nor a wheelchair could keep him away! Rich was a member of the Philadelphia Masonic Lodge #9, taught Sunday School at Christ the King Episcopal Church, Willingboro and later served as an usher and an outreach volunteer at St. Mary’s Episcopal Church, Burlington. He also volunteered for youth sports and other youth programs in Willingboro and filmed many JFK Gryphon HS football games for the team from the top of the stadium. The South Jersey Shore was a favorite family vacation spot along with the Island of Aruba. Rich and Olga also enjoyed vacationing with Carolyn & Norm and cruising with Mary & Gene. Unfortunately, due to COVID restrictions, services will be private to the family. In lieu of flowers, donations in Rich’s memory may be made to any of the following: Sunday School Program at St. Mary’s Episcopal Church, 145 West Broad Street, Burlington, NJ, 08016 or Fox Chase Cancer Center Foundation https://www.foxchase.org/giving Or Cooper Heart Institute https://support.foundation.cooperhealth.org/site/Donation2?1400.donation=form1&df_id=1400&set.SingleDesignee=1024 To share your fondest memories and condolences, please visit www.Givnish.com.

Richard Stewart Montgomery, of Mount Laurel, passed away peacefully with his family by his side on February 7, 2021. Born in Philadelphia, PA to the late John and Edwina Montgomery, he was 86 years young. Rich was the beloved husband of Olga... View Obituary & Service Information

The family of Richard Stewart Montgomery created this Life Tributes page to make it easy to share your memories.

Send flowers to the Montgomery family.