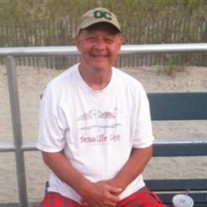 Robert V. Welsey “Bob”, 76, of Medford, New Jersey, passed away peacefully on June 3, 2021. Bob was born in Camden, New Jersey to Stanley and Caroline Wdzieczkowski on September 4, 1944. While working at St. Joseph’s Hospital in Philadelphia, he met and married his wife Jane Welsey (Curley) on June 7, 1986 in Greenwich, Connecticut. Bob had an unparalleled enthusiasm and love for life. Whether sitting on the beach in Ocean City or watching his beloved Browns, his zest for life was contagious to all his family and friends. A golf aficionado, Bob would jump at the chance to tell you about his infamous hole in one. If you were fortunate enough to be in the company of Bob, you would know that you’ve made a friend for life. Bob is preceded in death by his parents, Stanley and Caroline Wdzieczkowski and his brother, Stanley Wdzieczkowski. Bob is survived by his wife, Jane Welsey, and loving family, daughters Marisa (Jeff) Browndorf, Kaitlin (Alex) Wargo and son Ryan Welsey. A Pop Pop to his three grandchildren, Alex, Nick and Rebecca Browndorf, and Uncle Bob to fourteen nieces and nephews, and eight grand-nieces and nephews. Bob is also survived by his brother George (Myra) Welsey. The family wishes to extend their sincere thanks to the physicians and staff at Lankenau Hospital and Acuity Specialty Hospital of Southern New Jersey for the loving care they provided for him. Visitation will be held from 10am to 12pm, Saturday, June 12, 2021 at Givnish Funeral Home, 398 East Main Street, Marlton, New Jersey 08053, with the Celebration of Life services beginning at 12 noon.

The family of Robert V. Welsey created this Life Tributes page to make it easy to share your memories.

Send flowers to the Welsey family.