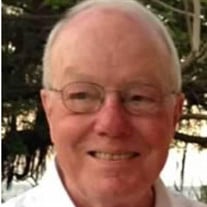 Ronald Ayres Johnson, 89, of Medford, New Jersey died at peace surrounded by his family on Wednesday, September 8, 2021. He is survived by his beloved wife Francese Johnson (Spring), his two daughters Larisa Blake and Karen Calabro, his four grandchildren Kalyn Blake, Ryan Blake, Cameron Calabro, Clare Calabro, and loving brother, Gary Wayne Johnson. He was also the loving cousin and uncle to his many nieces and nephews. Ron was born February 18, 1932, in Tulsa, Oklahoma to Maurice and Geral Johnson (Nelson). He was a graduate of Will Rogers High School, Oklahoma State University (BS 1954), and attended Tulsa University where he studied Industrial Psychology. He proudly served in The United States Army as First Lieutenant Officer during the Korean War. After he completed his service he began his career in Human Resources with American Airlines in New York City and continued in the Human Resources field until his retirement with Cigna Corporation as Assistant Vice President of Executive Compensation. Ron enjoyed a variety of activities and sports especially traveling, boating, and golfing. Ron was the personification of kindness who loved his family, friends, country and the ocean. His most favorite times were those spent with his family and friends on the back porch at Camp Johnson where his sense of humor shined. Relatives and friends are invited to attend a visitation beginning at 9:30AM, on Tuesday, September 14, 2021, followed by a Memorial Service with Military Honors at 11:00 AM at Givnish Funeral Home, 398 East Main Street Marlton, New Jersey 08053. Service will be livestreamed, and can be viewed at 11 am using this link: https://my.gather.app/remember/ronald-johnson-sep-2021

The family of Ronald A. Johnson created this Life Tributes page to make it easy to share your memories.

Send flowers to the Johnson family.