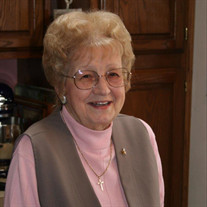 Ruth McLaughlin Griffith passed away peacefully in her sleep on March 28, 2021 at the age of 96. She was a beautiful woman inside and out, was loved by many, and will be deeply missed. From humble beginnings, she was born in a Cinnaminson,... View Obituary & Service Information

The family of Ruth M. Griffith created this Life Tributes page to make it easy to share your memories.

Ruth McLaughlin Griffith passed away peacefully in her sleep...