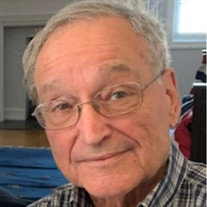 At the age of 81 years, Dr. Sebastian “Frank” Dovi, Jr. passed away peacefully on Monday, March 14, 2022. Born in Camden, NJ, Sebastian grew up in Haddonfield where he met the love of his life Patricia Ann Bresan in the 8th grade and was married for 58 golden years. Sebastian was the beloved father of Patricia Dovi Kent (Harlan Kent), Suzanne Lynn Dovi, Ph.D (Houston Smit), Cynthia Dovi Bucalo (Anthony Bucalo), and the late Sebastian F. Dovi, III (Kelli Young). Sebastian loved working on projects with his father, Sebastian Dovi, and they built an amazing two-story playhouse together in his backyard. His mom, Rose Dovi, raised her beloved son on pasta and lots of love. Sebastian was in the first graduating class of Bishop Eustace, lettering in basketball, track, and football. He graduated from Georgetown University as part of an ENSIGN 1915 program in 1962 and from Georgetown Medical School in 1966. After graduation, he worked in Bethesda Medical Hospital where he specialized in internal medicine. Sebastian proudly served his country in the US Navy during the Vietnam War as the Chief of Medicine at Roosevelt Roads Naval Base, Puerto Rico. There, he built his own sailboat, raced, and sailed through the Caribbean with his four kids in tow. Upon returning to the states, Dr. Dovi was stationed in the Philadelphia Naval Hospital and had a private practice in Mount Holly for over 20 years. He loved helping his patients and did so with kindness and humor. After being asked to be a Medical Director for Aetna, Sebastian shifted his focus to quality care. He loved using his knowledge of medicine to improve patient care. Sebastian was a resident of Moorestown since 1972. He attended every sports event that his kids played in. He was a man of many hobbies: an outstanding gardener, a koi pond builder, a photographer, a woodworker, and an avid birdwatcher, especially purple martins. He loved reading action novels and the newspaper. He insisted that desserts should be eaten first and that cars should be driven without seatbelts. He laughed at Pat’s puns and was truly generous to those in need. He was a globally ranked leader of Candy Crush and religiously played the lottery. An outstanding jitterbugger, when not dancing, Sebastian would eat the food off your plate if you didn’t watch him. His laughter and advice will be sorely missed Sebastian was “Pop-Pop” to Dr. Johnathan Kent, Katherine (Robert Butko) Kent, Samuel Kent, Hayden Dovi-Smit, Sophie Dovi-Smit, Shelbey Dovi, Sebastian Dovi IV, Skyler Dovi, Sydney Dovi, Sebastian Bucalo, Nicholas Bucalo, and Alessandra Bucalo. He also had 3 great-grandchildren, Ares, Echo, and Ino. He is also survived by his younger brother; Robert (Donna) Dovi. A gathering of family and friends will be held Tuesday, March 22nd from 9 a.m. to 10 a.m. at Givnish of Cinnaminson 1200 Route 130 North. His Funeral Mass will follow 10:30 a.m. at St. Charles Borromeo Church Branch Pike and Pomona Road, Cinnaminson. Burial will take place at Lakeview Memorial Park. In lieu of flowers, memorial contributions may be made to Doctors Without Borders at Donate.doctorswithoutborders.org To share your fondest memories of Sebastian, please visit www.givnish.com

At the age of 81 years, Dr. Sebastian &#8220;Frank&#8221; Dovi, Jr. passed away peacefully on Monday, March 14, 2022. Born in Camden, NJ, Sebastian grew up in Haddonfield where he met the love of his life Patricia Ann Bresan in the 8th grade... View Obituary & Service Information

The family of Sebastian F. Dovi Jr. created this Life Tributes page to make it easy to share your memories.

Send flowers to the Dovi family.