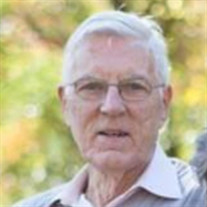 Thomas J Burke, Sr. of Cinnaminson, N.J. passed away peacefully on Tuesday March 16, 2021 in the company of two of his children. In these pandemic times, all his children, and often his grandchildren, were with him in shifts during the days... View Obituary & Service Information

The family of Thomas J. Burke Sr. created this Life Tributes page to make it easy to share your memories.

Send flowers to the Burke family.