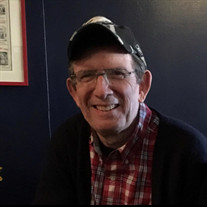 On July 11th, 2021, Thomas Patrick Connor Jr. gained his angel wings and was reunited with the love of his life Patricia in heaven. He is survived by his adoring daughter Rebecca Capobianco, son in law Joseph Capobianco, and beloved grandchildren Ava and Max. In addition to being a loving husband, father and grandfather, Tom was a dear brother to his eight siblings, Mary Ellen (Joe) Norpel, Nancy Connor, Mimi Connor, John (Susan) Connor, Jim (Mary) Connor, Cecilia (Chris) West, Fran (Karen) Connor, Loretta (Charlie) Simpson, caring uncle to his 24 nieces and nephews and a wonderful cousin to his large extended family. Born July 31st, 1939 to Anastasia (McCormick) and Thomas Patrick Connor, Tom was raised in Philadelphia and Drexel Hill and was the oldest son in a family of 9 children. He graduated from La Salle College High School and went on to earn his Bachelor's Degree and other advanced degrees. Tom taught high school religion and math for many years and later began his career in nursing home administration. He spent much of that career as the administrator of the Belvedere Nursing home in Chester PA and later as the administrator of the Transitional Care Unit at Delaware County Memorial Hospital. Tom's calm, loving demeanor and his compassion for people shown through in everything he did and made him an especially wonderful husband, father, grandfather, brother, son, uncle, cousin and friend. He loved his family deeply and was always there for them, which was particularly evident during his wife Patricia's long battle with Alzheimer's disease. One of his most cherished roles was being a grandfather and he was honored that his grandchildren gave him the name "Poppy Hat" because he always wearing his Phillies or Eagles hat. Tom had a special way of making everyone feel comfortable. He was always quick to crack a joke and make you laugh, but he also listened intently to what you had to say and always had something kind to say in return. At work he made a point to know not just everyone's names, but the names and stories of their family members. No matter how busy he was, he would always find time in his workday to walk around, ask everyone how they were doing, ask about their family members and wish them all well. Tom was a clown, both figuratively and literally. He loved making others laugh, and worked hard to find new ways to do so, whether it be sharing his favorite comic from the paper, telling jokes and funny stories, dressing up as a clown, or cutting out headlines and stories and sharing them in his newsletter. In his spare time he graduated from clown college and for years participated in the Philadelphia Thanksgiving Day Parade. He also loved to clown at the Doo Dah Parade in Ocean City and at the Annual Richard West Wheelchair Race on Long Beach Island. Tom was an avid reader of books and the Inquirer, and enjoyed crossword puzzles, word jumbles and Jeopardy. He loved sports, having played basketball, softball and tennis and was a die hard Phillies fan. He loved to travel with his wife and daughter, take walks on the sea wall in Brigantine, attend all types of sporting events and spend quality time with family and friends. Tom had many close groups of friends, including friendships he made in his teens and twenties. Those friendships have lasted over 60 years, and they get together a few times a year. Tom was truly one of the great ones and will be deeply missed by so many. Relatives and friends are invited to gather for a celebration of life for Tom and Pat Connor on August 12th at St. Dorothy's Catholic Church, 4910 Township Line Rd, Drexel Hill, PA 19026. Visitation will begin at 9 am, followed by a funeral mass at 1030 am. Our family had hope to invite everyone to a luncheon following the funeral. Unfortunately due to the newest information coming in regarding the delta variant, we have made the difficult decision to restrict the luncheon to immediate family only. We are deeply saddened to make this decision but hope you understand that we need to continue to protect our vulnerable family members and unvaccinated children. Thank you.

On July 11th, 2021, Thomas Patrick Connor Jr. gained his angel wings and was reunited with the love of his life Patricia in heaven. He is survived by his adoring daughter Rebecca Capobianco, son in law Joseph Capobianco, and beloved grandchildren... View Obituary & Service Information

The family of Thomas Patrick Connor Jr. created this Life Tributes page to make it easy to share your memories.

Send flowers to the Connor family.