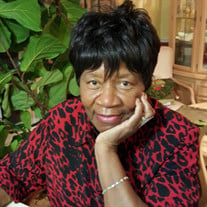 Vernia C. Hackney was born Vernia C. Gavin on September 11, 1939 in Wakulla County, Florida, to the late Tom and Allie Maude-Hill Gavin. The sixth of Tom and Allie Maude's eight children, Vernia's siblings included Rosetta Cromartie, Earnestine Davis, Christine Gavin, Anna Louise Stewart, Mertha Smith, Walter Gavin, and Clinton Gavin. Vernia, or "Verna C." as she was affectionately known to her immediate and extended family, enjoyed a childhood filled with strong family bonds. As a young girl growing up in a small tin-roofed home alongside a dirt road on the outskirts of Tallahassee, Florida, Vernia's parents instilled the importance of hard work and lovingly enforced high expectations regarding her education and contributions to the numerous domestic tasks involved with running a household at the time. Those who have shared memories of her at this time describe her as kind and respectful and always eager to help out her mother, especially with gardening. She was known to have a lovely singing voice and she enjoyed singing in the church choir. Vernia was also an outstanding student who excelled in her studies and graduated from Shadeville High School. After graduating, she began working at a dry-cleaners in Tallahassee, Florida. Propelled by the hope of establishing a new life with broader possibilities for her family, in 1969, Vernia and her two children Gwendolyn Cobb and James Hackney, boarded a Greyhound bus bound for Los Angeles, California. The 2,255 mile journey reunited Vernia with three of her older siblings, Christine, Rosetta, and Clinton, who had already relocated to Los Angeles. As a single mother supported by her siblings, Vernia established a loving household for Gwendolyn and James to whom she imparted the value of a strong work ethic, education, and devotion to family through her lifestyle. Never one to avoid hard work, she secured a job at the Mattel Toy Company. She also joined the Gospel Temple Baptist Church where she remained a dedicated member for decades actively serving on committees and participating in numerous fundraising drives. After working at the Mattel Toy Company for a period of time, Vernia started working as a pre-school teacher beginning a fulfilling career in early childhood education that spanned nearly fifty years. While working as a teacher, she attended evening and weekend classes at Los Angeles Southwest College, earning an Associate in Arts Degree in Childhood Development. Vernia, or "Hackney" as she was fondly regarded by many of her educator colleagues, cherished the many years that she taught at the Training and Research Foundation-Head Start Program located in the Los Angeles' Chinatown district. After working in Chinatown, she continued as a Head Start program teacher in the South Central Los Angeles area. Even while in official retirement she continued to work in Los Angeles Unified School District's inner city schools- particularly within the South Central area of the city as a substitute for several years. Undoubtedly, generations of children in the Los Angeles area were blessed by Vernia's patience, calm demeanor, and ability to appreciate each student's potential while finding humor in their daily antics. Aside from her devotion to her friends and family, Vernia was known as a fashionista with an affinity for leopard clothing and accessories. In addition to a passion for clothing, she was a chocolate enthusiast and Los Angelino at heart. Vernia was a steadfast friend to many and was careful to maintain those close friendships over the course of several decades. She was a devoted aunt and cousin. As the last surviving sibling, or the "last pea in the pod" as she called herself, she cherished years of frequent communication, family gatherings and celebrations with her cousins, nieces, and nephews. Vernia's deep and abiding love for her children, Gwendolyn and James, extended to their spouses Garry Cobb and Ann McCarthy Hackney, respectively. As a loving grandmother to Allie Cobb, Garry Cobb II, Allyse Wesolowski and Adrian Hackney, Vernia assumed many aliases of which "Gramms", "Graham" and "Grandma Vernia" are just a few. And even before they officially joined the family, Vernia was happy to become "Graham" to Garry Cobb II's wife Shardae Cobb and Allyse Wesolowski's husband Jeff Wesolowski. To her beloved great-grandchildren, Azlan Cobb, Rayna Harrison, Vivien Wesolowski, and Sebastian Wesolowski, she was an attentive great-grandmother who gleaned joy from each stage of their development. Throughout the course of her life, Vernia truly embodied 1st Corinthians 13 in that she always looked for the best in each of her loved ones and consistently demonstrated that love through her words and actions. For those fortunate to share in her life, her memory will continue to be a blessing. A gathering of friends and family will be held on Friday, February 26 from 10:30am to 11:30am at Givnish of Marlton, 398 E. Main Street. Her funeral service will follow at 11:30am and will be live streamed on her tribute page under the photos & videos tab.

The family of Vernia C. Hackney created this Life Tributes page to make it easy to share your memories.

Send flowers to the Hackney family.