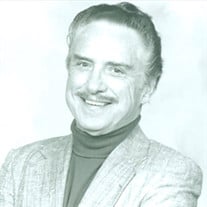 William "Bill" A. Kauffmann of Cinnaminson, NJ passed away peacefully on January 3, 2022 at the age of 90. He was a devoted and loving husband to his loving wife Deanna who passed away suddenly with family by her side on Sunday, June 27, 2021. Bill married Deanna (nee McGonigle) in 1955 at St. Leo’s Church in Philadelphia. They were married for 66 years. They had three children: Mary (the late Joseph) Keough of Cinnaminson, NJ, Christian Kauffmann of Riverton, NJ, and Kathleen (David) Harty of Erial, NJ. His grandchildren are Ryan, Colleen, Deanna, Krista, and Colin. His great-grandchildren are Blaise and Briana. Bill was born in Brooklyn, NY to Mary Halligan Kauffmann Avery and William Christian Kauffman on October 10,1931. Bill and his family lived in Philadelphia and Horsham, PA until 1973 when they moved to Cinnaminson, NJ. Mr. Kauffmann's brother is George Kauffman of Southampton, NJ. Mr. Kauffmann's nephew is Brian who has four children. Mr. Kauffmann quit high school at age 16 and joined the Naval Reserve. He served on active duty during the Korean War. He had a total of six years of service. Prior to his honorable discharge, he attended the elite Naval Legal Justice School in Rhode Island and then saw active duty on the Destroyer U.S.S. Gearing DD-710. Mr. Kauffmann is a lifetime member of the Veterans of Foreign Wars. He later graduated from The Wharton School, University of Pennsylvania, where he earned a degree in business administration. He also did graduate work at The Wharton School and the University of Michigan, and he was an adjunct instructor for Rutgers University and Burlington County Community College; he taught courses in personnel, labor law, and human resource management. He was a lightweight and welterweight boxer for the Police Athletic League in Philadelphia; he boxed in several Golden Glove and Diamond Belt Tournaments and was the finalist in his division in the 4th Naval Reserve District Championship. He was also a charter coach for the U.S.A. Boxing Association. Mr. Kauffmann was the first resident president of Sweetwater Condo Association of Cinnaminson, and he served on its board of trustees for several years. Mr. Kauffmann is a member of the St. Charles Borromeo R.C. Church in Cinnaminson; he served on the Holy Name Society and was a contributor to the building church fund. He was the founding president of the Cinnaminson Business Association, and he also served on the Cinnaminson Economic Development Committee. Mr. Kauffman was a director and chief corporate human resources executive for the Hoeganaes Corporation in Cinnaminson, where he was employed from 1967 until his retirement in 1993. Prior to that, he was with the Gasboy Corporation in Lansdale, PA as a personnel manager: He also served ad hoc as a labor relations spokesman and negotiator for Cinnaminson Township in the 1970s. After retirement, he joined H&R Block as a senior tax adviser and instructor for 22 years, and he was a member of the National Society of Tax Professionals. He was registered with the IRS as a professional tax return preparer: Bill had a top-secret clearance from the Department of Defense at a prior place of employment. He was active in numerous charitable and business endeavors, including United Way, YMCA, and Zurbrugg Hospital. He was on the board and served as treasurer for the Burlington County Community Action Program and as a chairman of the Save Head Start Committee. He was a charter member of the Society for Human Resource Management (SHRM), and he holds SHRM's highest lifetime accreditation. He was on the NJ Business & Industry Association (NIBIA), and he served as the chairman of NIBIA's workers' compensation group. While living in Philadelphia, he was elected as the judge of elections and as the committeeman of the 42nd Ward in Philadelphia. He served on the Technical Advisory Committee for the Hennepin School in Minnesota. He was a member of the Advisory Board of the Manufacturers' Association of Delaware Valley, and he was a member of the Burlington County College Advisory Board and the American Society of Training and Developing. As a trainer, he gave numerous courses on human resources, leadership, and other business subjects for the American Management Association, Delaware Valley Business Association, and other groups. He was also active in many animal rights groups. He was active in rescuing feral cats and having them fixed and released. He was bitten by one of the feral cats and had to receive several injections against rabies. Relatives and friends are invited to attend Bill’s viewing Saturday from 9:30 a.m. to 11 a.m. at Givnish of Cinnaminson 1200 Route 130 North. His Funeral Mass will follow 11:30 a.m. at St. Charles Borromeo Church Branch Pike and Pomona Road, Cinnaminson. Burial, with Military Honors, will take place at Lakeview Memorial Park. To share your fondest memorial of Bill, please visit www.givnish.com

William "Bill" A. Kauffmann of Cinnaminson, NJ passed away peacefully on January 3, 2022 at the age of 90. He was a devoted and loving husband to his loving wife Deanna who passed away suddenly with family by her side on Sunday, June 27, 2021.... View Obituary & Service Information

The family of William A. Kauffmann created this Life Tributes page to make it easy to share your memories.

William &quot;Bill&quot; A. Kauffmann of Cinnaminson, NJ passed away peacefully...

Send flowers to the Kauffmann family.