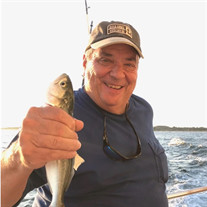 William C. Tymick of Cinnaminson passed away on January 21, 2022 at the age of 68. He was born in Aurora, Illinois to the late Marvin F. and Shirley (nee Nobis) Tymick. In his freshman year of high school, his family moved to Cinnaminson and he and his parents never left. He also had a brother, John. Bill obtained an associate degree in accounting from Burlington County Community College but fell in love with truck driving instead and did that for the rest of his career. Before retiring a few years ago, his last job was at New Penn Motor Express in Cinnaminson. For most of his life, Bill was an avid golfer. He also loved doing home improvement projects, both at his own home and the homes of his friends, and especially enjoyed woodworking. Bill had a tool collection that could rival Bob Vila’s! He loved warm weather and going on trips with friends. He was a forever fan of the Eagles, even on their bad days, and enjoyed Phillies games. To Bill, the perfect woman was Betty Boop. He loved fishing with his nephews (he liked to claim he taught them to fish…), sending surprise presents to his friends, and watching spooky shows, especially “Supernatural” and ghost-hunting shows. If you knew Bill and experience a mysterious prank, he may just be testing out his new ghost powers on you! “Friends” isn’t the right word for the people in his life because almost everyone he met became his family. Like a dog, if he didn’t like you, there was probably something wrong with you. He always saw the positive in people and gave everyone the benefit of the doubt. He was insanely generous with his time, treasure, and talents, especially if anyone could benefit from his beloved Ford F-150. Bill was there for anyone who needed help, even if he had just met you, from building a deck to a late night pickup from the airport. Bill always had a sense of humor, even in hard times, and had a knack for making people feel very special. Along with his parents, he was preceded in death by part of his chosen family, John and Cathy Leedom of Souderton, who were his best friends for many years. He is survived by their daughters, his honorary nieces, Jennifer Leedom of Aston, PA (also his goddaughter) and Amanda Johnson and her husband, Josh, and their boys, Nicholas, Noah, and Nathan, of Souderton, PA. Uncle Bill was the best uncle any kid could ask for: always supportive, proud, and teasing. There are many who had the honor of calling him Uncle Bill while they were growing up and then passed on that honor to their own children. Bill’s chosen family includes many, all of whom felt like he was a brother or an uncle to them. There are too many to list here but of note are: his best friend from high school, Rex Knowlton, and his wife Gina and their children and grandchildren; Donna and Bob Steranko and their children Bobby, Ryan, and Brandon; Charla Paetow; John and Cathy Misunas; Judy Erichson; Susie and Doug Lloyd; Lonnie DeRosa and Linda Tromp; Glenna and Moose Piechota; and Ken and Tammie Kennedy. We all join in saying: Oh no, Mr. Bill! You left much too soon, and we’ll love and miss you always. Thank you for everything. The best way to honor Bill is to spread kindness and humor. However, in lieu of flowers, donations can also be made to University of Rochester Medical Center at https://www.urmc.rochester.edu/giving/urmc-advancement/giving/how-to-give.aspx Bill requested to be cremated and his ashes will be spread at a later time. A Celebration of Life will be held around his birthday in June.

William C. Tymick of Cinnaminson passed away on January 21, 2022 at the age of 68. He was born in Aurora, Illinois to the late Marvin F. and Shirley (nee Nobis) Tymick. In his freshman year of high school, his family moved to Cinnaminson and... View Obituary & Service Information

The family of William C. Tymick created this Life Tributes page to make it easy to share your memories.

Send flowers to the Tymick family.